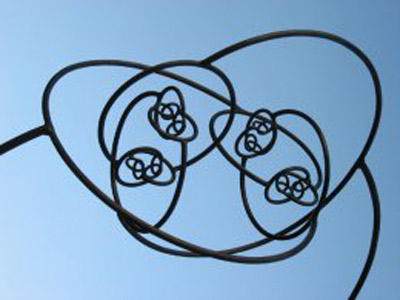 A metal sculpture of Alexander's horned sphere by Gideon Weisz.

Alexander's horned sphere is an example of what, in topology, is called a "wild" structure. It is named after the Princeton mathematician James Waddell Alexander (1888–1971) who first described it in the early 1920s.

The horned sphere is topologically equivalent to the simply connected surface of an ordinary hollow sphere but bounds a region that is not simply-connected. The horns-within-horns consist of a recursive set of interlocking pairs of orthogonal rings of decreasing radius. A rubber band around the base of any horn couldn't be removed from the structure even after infinitely many steps. The horned sphere can be represented in the plane by reducing the interlock angle between ring pairs from 90° to 0°, then weaving the rings together in an over-under pattern.

The sculptor Gideon Weisz has modeled a number of approximations to the structure, one of which is shown in the photograph.