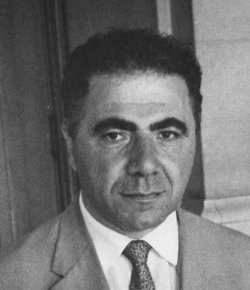 Viktor Ambartsumian was a Georgian-born Armenian astrophysicist who worked at the Pulkovo Observatory; the Byurakan Astrophysical Observatory, which he founded and directed; Erevan University; and the Armenian Academy of Sciences, where he served as president from 1947 to 1993. While at Pulkovo he also taught at the University of Leningrad and wrote the first Russian textbook on theoretical astrophysics.

Most of his research was devoted to invariance principles applied to the theory of radiative transfer, inverse problems of astrophysics, and the empirical approach to the problems of the origin and evolution of stars and galaxies. He was the first to suggest that T Tauri stars are very young and to propose that nearby stellar associations are expanding. He also showed that evolutionary processes such as mass loss are occurring in galaxies; worked on interstellar matter, radio galaxies, and active galactic nuclei; served as president of the International Astronomical Union; and was the principal organizer of two major conferences on SETI at the Byurakan Observatory in 1964 and 1972.