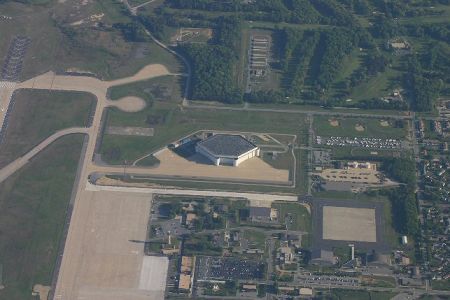 Aerial shot of the Air Force One hangar and surroundings at Andrews AFB.

The 316th Wing and 79th Medical Wing are two of the three wings within the Air Force District of Washington (AFDW), the other being the 11th Wing at Bolling Air Force Base.

The main tasks of Andrews AFB at present are to provide emergency reaction and contingency response capabilities that are critical to national security, and to support for Air and Space Expeditionary Forces.

In the early part of the 20th century, the present site of Andrews was often discussed for a potential civilian airfield. In August 1942, President Franklin D. Roosevelt ordered the Secretary of War to acquire the land and build a military airfield. Construction began later that year. On April 19, 1943, the first permanent unit, the 463rd Base Headquarters and Air Base Squadron, arrived from Westover Field, Mass., with 105 enlisted men and five officers.

Camp Springs Army Air Field became operational on May 2, 1943, when the first Republic P-47 Thunderbolt arrived; 75 other P-47s arrived during the first month. The field's early mission was to train fighter pilots for overseas combat duty.

Camp Springs became Andrews Field in 1945 to honor of one of the Air Force's founding fathers, Lt. Gen. Frank M. Andrews. He died in an airplane crash on May 3, 1943, ironically the day after the base that now bears his name opened. Shortly after the Air Force became a separate service in 1947, the base's name changed to Andrews Air Force Base.

In the years following World War II, Andrews served as headquarters for Continental Air Command, Strategic Air Command and the Military Air Transport Service. It was also headquarters to the Air Research and Development Command and its successor, the Air Force Systems Command, from 1950 to 1992.

The year 1947 marked the arrival of the first permanently assigned jet-powered aircraft, an F-80 Shooting Star, at Andrews. With the onset of the Korean War in Jun 1950, Andrews became involved in combat readiness training for B-25 medium bomber crews.

However, almost since its establishment, Andrews has been known for its special air mission – the transportation of senior government and military leaders. President Harry S. Truman was the first to fly a presidential flight out of Andrews on Nov 24, 1946. In 1959, Detachment 1, 1254th Air Transport Group received its first jet aircraft, a VC-137. While the president's official aircraft, a C-121 (Columbine III), remained at Washington National Airport, the president often used the new VC-137 for longer trips. President John F. Kennedy's official aircraft, a C-118, permanently transferred from Washington National in Mar 1962, and Andrews officially became the "Home of Air Force One."

In 1963, the Naval Air Facility moved to Andrews and is currently headquartered on the east side of the base. Besides the NAF, Andrews today is also home to the Air Force Office of Special Investigation headquarters, the DC Air National Guard's 113th Wing, the Air Force Reserve's 459th Air Refueling Wing and several other tenant units.

The 89th Airlift Wing became the host unit for Andrews in 1991. Known as "The President's Wing," the 89th lives up to Andrews' history as the elite Air Mobility Command wing for transporting VIPs around the world. Not only does Andrews provide service for America's senior officials, but also kings, queens, presidents, prime ministers and military leaders from foreign nations fly onboard the 89th's aircraft and transit through the base on a routine basis.

Note: The text of this section is copied from this Andrews AFB website fact sheet.


Aircraft based at Andrews