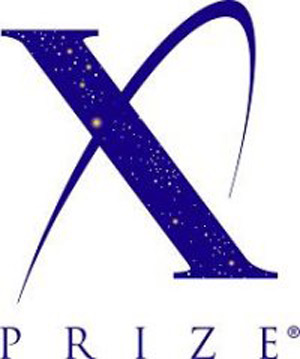 The Ansari X Prize was a $10 million prize, offered by the X-Prize Foundation, for the first non-government organization to launch a reusable manned spacecraft into space twice within two weeks. Its aim was to spur the development of routine, low-cost, privately-funded spaceflight. The prize was won on October 4, 2004, 47 years to the day after the launch of Sputnik 1, by the Tier One project using the experimental space plane SpaceShipOne.

The X-Prize was created in 1996 in the spirit of a long history of aviation prizes, most notably the Orteig Prize. Raymond Orteig, a wealthy hotel owner, offered $25,000 to the first person to fly solo non-stop from New York to Paris. The feat, achieved by Charles Lindbergh on May 20, 1927, spurred tremendous growth in the aviation industry. Within a year of that feat, the number of pilots in the US tripled, the number of planes quadrupled, and airline companies saw their passengers increase 30-fold. Moreover, nearly a quarter of all Americans viewed Lindbergh's plane (the Spirit of St. Louis) in the year following his trans-Atlantic flight.

It is in this spirit that X-Prize founders offered their $10 million prize. Backed by a board of trustees (including Anousheh Ansari), "The New Spirit of St. Louis Organization," and several well-funded supporters, the group hopes to stimulate "the creation of a new generation of launch vehicles designed to carry passengers into space."


Rules of the competition

The Ansari X Prize originally required that a team privately build, launch, and finance a vehicle capable of carrying three passengers to a minimum altitude of 100 km (62.14 mi or 328,100 ft) – the boundary of space as defined by the Fédération Aéronautique Internationale – and safely returning to Earth. A later modification in the rules allowed test flights to be made with a single pilot and added ballast to compensate for the weight of hypothetical passengers. In order to claim the prize, the same vehicle had to repeat this trip twice within two weeks. According to the rules and guidelines of the competition, no more than 10% of the vehicle's non-propellant mass could be replaced between the first and second flights as a demonstration of economic reusability.