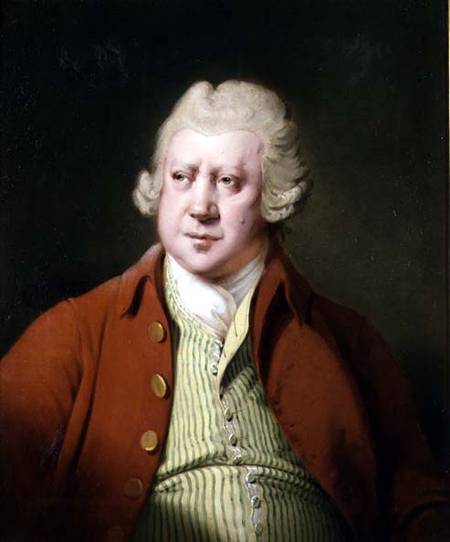 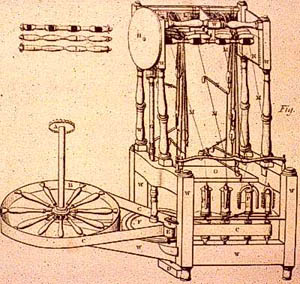 Richard Arkwright was an English industrialist and inventor of cotton carding and water-powered spinning machinery. In 1769 Arkwright patented a spinning frame which was the first machine able to produce cotton thread strong enough to use in the warp. He was a pioneer of the factory system of production, building several water- and later steam-powered mills in Nottingham.

Before we can fully understand the revolutionary changes which were introduced by Arkwright, we need to take a short look at the history of cotton spinning and weaving. Although cotton has been known for thousands of years in the Middle East, it was not introduced into Europe on any great scale until the Middle Ages. It reached England when the craft of cotton spinning was brought over by immigrants from the Low Countries in the late 16th century. These early cotton spinners worked in their own homes and spun and wove the cotton entirely by hand. Unfortunately, a hand-spun cotton is irregular in thickness and rather weak, so that at this time, and for a century and a half afterwards, cloth could not be woven entirely from cotton. Instead a material called fustian was produced which used strong linen threads from the warp (the threads running lengthways through the material), while the weaker cotton was used only for the weft (the threads running across the width of the material). Since linen was more expensive than cotton, and in shorter supply, there was a great need to find some way of producing really strong cotton threads so that all-cotton cloth could be made which would be strong enough to wear well.

In 1733 John Kay invented the flying shuttle which made it possible for a weaver to produce a wider cloth, and to weave more quickly. With the improvement in weaving there came an increased demand for cotton thread, about 1767 James Hargreaves introduced the spinning jenny, a machine which made it possible for one person to spin 12, or even 24, threads at the same time. The spinning jenny was, however, operated by hand, and although it produced more cotton than the older spinning wheel, the quality was no better. The production of cotton thread which could be used for the warp of a material remained a problem, and Richard Arkwright was the man who solved it.

Arkwright was born in Preston, Lancashire, the youngest of 13 children. In about 1750 he moved to nearby Bolton and for some years ran a wig-making business and a barber's shop. About 1767 he gave up this trade and turned to the design of textile machinery. In collaboration with John Kay, a watchmaker of Warrington, Arkwright built the first cotton spinning machine which was designed to be power driven, and which would produce thread which was both uniform and strong.

Arkwright's first spinning machine was tested at the Free Grammar School in Preston in 1769, and proved highly successful. Soon afterwards he moved to Nottingham, where he built a small factory in which cotton was spun on his machines. In the factory the machinery was driven by horses, but in 1771 a larger mill was built at Cromford in Derbyshire, and here the machinery was driven by water wheels. In the next few years Arkwright, with the help of Jedediah Strutt and Samuel Need, built mills in Lincolnshire, Lancashire, and Scotland. His water-driven machines were known as water-frames.

Arkwright's machines could be operated by unskilled labor, and in many mills children of nine years old or even less were employed. As a result of this, the old craftsmen who spun by hand found themselves unemployed, and Arkwright became very unpopular among them. In 1779 a mob sacked one of his mills at Chorley, but the progress of machine-made cotton was scarcely interrupted.

In 1775 Arkwright introduced another machine into the cotton industry, an improved carding engine. The carding engine was machine which combed out the tangle of fibers forming the raw cotton and laid them all parallel, so that they were ready for the twisting and stretching process which was carried out on the water-frame. With this improvement it became possible to mechanize the whole process of cotton thread production. In 1790 Arkwright introduced a steam-driven beam-engine made by James Watt into his Nottingham mills.

Richard Arkwright was knighted in 1786 and died six years later. He was buried at Cromford church, which he had built, not far from the site of his first water-powered mill.