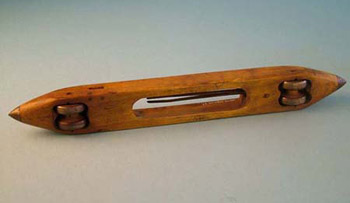 John Kay was a British engineer and inventor of the flying shuttle (patented 1733), which greatly increased the speed of weaving while reducing the number of workers required. The flying shuttle, by enabling a weaver to throw the shuttle automatically from side to side across the warp of a loom, doubled output. Kay's invention – a major step in the development f automatic weaving – was seen as a threat to handloom weavers and he was forced to emigrate to France.