This clock escapement mechanism was invented in China in the 8th century. [A] A spoke [1] is arrested by a lock [2] while a scoop [3] fills with water [4] from a tank at a constant rate. The lock is released [B] when the filling scoop trips a checking fork [5], overcomes its counterweight [6] and trips a coupling tongue [7]. which pulls down an upper lever [8] with its own counterweight [9]. This jerks a chain [10], freeing the lock and allowing the wheel to swing clockwise until the lock drops again, arresting the following spoke which is also held steady by a ratchet lock [11]. 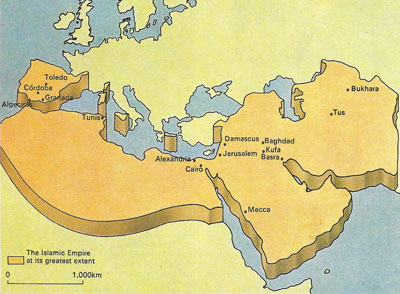 The Islamic Empire, by the 8th century, stretched from India to the Pyrenees, making major contributions to mathematics and chemistry and laying the basis for the international spread of learning. 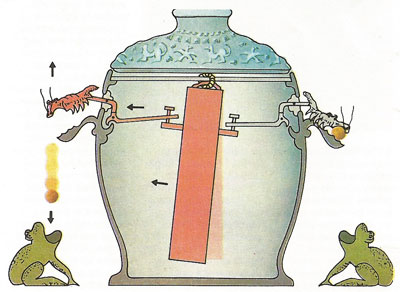 A seismograph built in 132 by the Chinese scientist Chang Heng was a vase with a ring of holes round the rim. Metal balls lightly held in each hole fell into receptacles below when there was an earth tremor. It indicated the direction of the tremor according to which balls fell and which did not. In a modern attempted reconstruction of the internal mechanism, a pendulum with arms and cranks governs the motion of the balls. 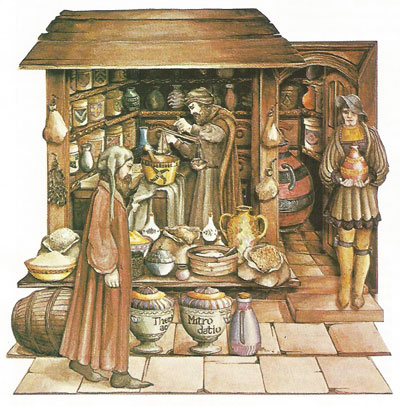 A typical pharmacy shop of the Middle Ages was based on Arab traditions. The Arabs brought knowledge of Persian and Indian drugs and spices such as camphor, cloves, cassia, nutmeg and senna. Their influence on European pharmacy was exerted chiefly through Benedictine monks. In the 14th century pharmacy, medicine, chemistry and the grocery business were combined and apothecaries and grocers organized themselves into guilds.

By the 5th century AD the long-ailing Roman Empire lost control of Western Europe. It was overcome by its excessive size, by the "softness" of its citizens, and by a population explosion in Asia that propelled vigorous new peoples against Rome's extended frontiers. At the same time the Eastern Roman Empire, whose capital was at Byzantium (later Constantinople and now Istanbul), flourished until a new attack from the east in the seventh century.

The Arabs emerged from Arabia as the followers of the new prophet Mohammed (AD c. 570–632), a trader from Mecca. Within about 100 years they captured much of the Middle East and North Africa and invaded Spain and even France. These new conquerors had no culture of their own, but they borrowed learning from Syriac, Greek, Indian and other peoples whom they encountered through their conquests and travels. They became the founders of the internationalism that is one of the most striking features of science. They aimed at all-embracing knowledge and perhaps Avicenna (980–1037) came nearest to attaining it.

The Muslims had a strong trading tradition. Like other peoples, they were interested in the exact calculation of shares in goods and the allocation of family inheritances. They assessed the declining value of female slaves in much the same way as cars are depreciated today. When they invaded India, they discovered Indian mathematics.

The Indians introduced the number system now universally in use, together with the zero symbol and decimals. Their work became known to Al-Khwarizmi (780–c. 850), the greatest of the Arab mathematicians. He was librarian to the caliph Al-Mamun (786–833) in Baghdad and published in 830 his treatise on Al-jabr wa'l muqabala, from which the word algebra is derived. He studied various classes of quadratic (second order) equations and called the unknown quantity to be calculated "the root". Knowledge of mathematics in medieval Europe was based mainly on Latin translations of his works. One of his most famous successors was the Persian poet Omar Khayyam (c. 1048–1122), who dealt with special classes of cubic equations.

The Arabs devoted much attention to pharmacy and to astronomy. They calculated elaborate trigonometrical tables, which were used to determine the exact times of prayers and to navigate the Indian Ocean. Cordoba in Spain became the most advanced intellectual center in Europe. The dependence of Medieval Europe on Arab knowledge is illustrated by the example of Adelard of Bath, who went to Cordoba disguised as a Muslim student in 1120. He returned to England with a copy of Euclid's book, which served as a mathematical text for feudal Europe for the next four centuries.

The Arabs also brought knowledge of Chinese inventions and discoveries to Europe, including gunpowder, the magnetic compass, printing with movable type and an efficient horse harness.

The Chinese invented an escapement mechanism for a water clock, generally credited to Yi Hoing, in 725. It enabled them to build the first accurate mechanical clocks. Chinese science also produced the first seismograph, for detecting earthquakes, built by Chang Heng in 132. In 1054 they observed the great new star – a nova, the parent of the Crab Nebula – later to become one of the most important objects in the development of modern radio astronomy.

The Arabs performed a unique service as world informants on ancient and contemporary science. They introduced the ideas of India and China to the Western world. But they were not the founders of modern science, for this arose in Europe.

The Roman Empire in Europe disintegrated into a multitude of individual strongholds of local military chieftains. Slaves became bandits, or peasants tied to the land, but no longer slaves. So the feudal period began. People who settled around the strong-points came to be known as the bourgeoisie, because they lived outside the castle or burg. Many of them were craftsmen. They were dependent of what they could learn from the Arab encyclopedists but they looked at the old knowledge in a more individual way. One such man who played a significant role in the advance of medieval science was Leonardo Fibonacci of Pisa (c. 1180–1250). His father was employed on the Barbary coast and there Leonardo learned the Arabic language and arithmetic. On his return to Pisa he introduced Arabic numerals into Europe.

The most eminent of English medieval scientists was Roger Bacon (1214–94). He proposed combinations of lenses for telescopes and microscopes and may have been the first to suggest spectacles.

Roger Bacon said that the only man he knew who was to be praised for his experimental science was Petrus Peregrinus of Maricourt, who published a treatise on magnetism in 1269. He explicitly pointed out the importance of manual skill in science. He was one of the forerunners of modern science, in which experiment and theory are equally balanced. This became possible only through the emancipation of the craftsman in medieval Europe, a change that was to lead to the Renaissance.