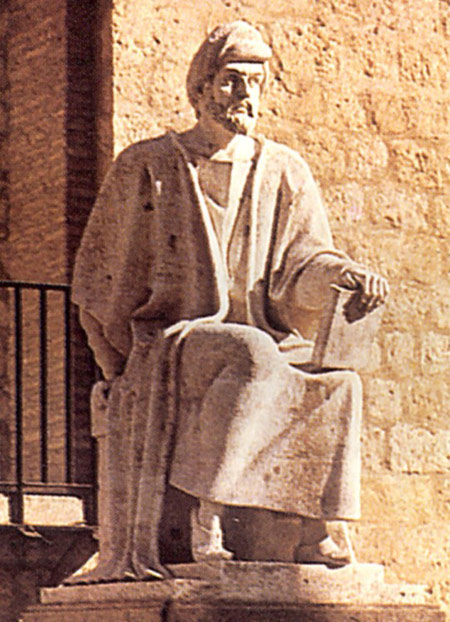 Statue of Averroës in Córdoba, Spain.

Averroës is the Latin name of abu-al-Walid Muhammad ibn-Ahmad ibn Rushd, Spanish/North African Arab philosopher, a commentator on Aristotle and Plato who exerted a great influence on the development of the later Latin scholastic philosophy.


Averroës was born at Córdoba (known as Cordova in English) in Spain. His father, who was judge there, taught him Islamic jurispridence. In theology and philsoophy, he had ibn Tophail for his instructor, and in medicine, ibn Zohr the elder. He eventually succeeded his father as judge in his home city and afterward judge in Morocco, where, for a while, he was the calif's physician. However, he was accused of departing from orthodox Islamic doctrines and was dismissed from his office and forced to recant his heretical views. After this, he returned home and lived in poverty until Calif al-Mansur reinstated him in his position in Morocco, where eventually he died.


Averroës regarded Aristotle as the greatest of all philosophers. He translated (from the Syrian) and illustrated Aristotle's writings, but the influence of the Alexandrian or Neoplatonic views is seen in his works, as is most of the Arabian philosophers.