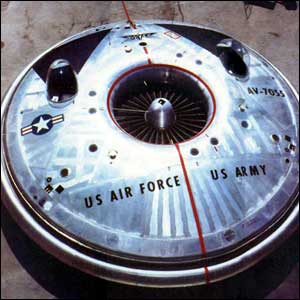 The Avrocar (VZ-9AV) was a prototype flying disk, which ascended vertically and, it was hoped, would eventually reach speeds of 1,500 mph. American engineers tinkered with the sleek design for years but were unable to solve severe stability problems, and it never flew more than 2.5 m above the ground.

In 1952, Avro Canada began to study designs for a supersonic circular wing fighter-bomber using $400,000 in funding from the Canadian government. After this funding ran out the Canadian government abandoned the project, but enough progress had been made to spark the interest of the US government. In July 1954, the first of two US Air Force contracts totaling $1.9 million was awarded to Avro for further study. Avro itself invested in $2.5 million and completed design studies and small-scale tests on a vehicle designated the P.V. 704 (US designation, System 606A). The 606A design was almost 30 ft in diameter with a maximum weight of 27,000 lb and a design speed over 1,000 mph.

The US Army became interested in the project in 1958, feeling that the circular wing could fit in with its plans for a "flying jeep." The Air Force agreed to redirect its effort as this could demonstrate the design features of the 606A concept in less time at a must lower price. The resulting craft was named Avrocar and given the Army designation VZ-9AV (VZ for vertical takeoff research aircraft, 9 as it was the ninth in a series and AV for Avro).

The Avrocar was a saucer-shaped disk 18 ft in diameter and 3 ft thick, it was designed to go 300 mph and able to fly to an altitude of 10,000 ft. It weighed 5,650 lb and had separate cockpits for two crew members. Three Continental J-69 turbojet engines powered a centrally located fan with a diameter of 5 ft. Two prototypes rolled out of the factory in May and August 1959. The first Avrocar (58-7055) was sent to NASA Ames, Moffett Field, California. It first flew there on May 17, 1961 and was also used for wind-tunnel testing. The second Avrocar made its first tethered flight, lasting 12 sec, on September 29, 1959, and its first untethered flight occurred on November 12, 1959. Formal Air Force flight evaluations took place at Avro in April 1960 and June 1961. These demonstrated a maximum speed was 35 mph, while the research at NASA showed that the Avrocar was aerodynamically unstable.

The program was terminated in December 1961 after a total of $10 million had been spent. At Avro (UK) project 724 never proceeded beyond the designs stage in Juen 1953. The two prototypes reside today at the US Army Transportation Museum and at the Smithsonian NASM Garber site.