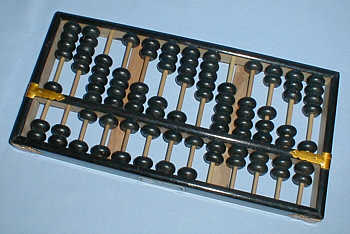 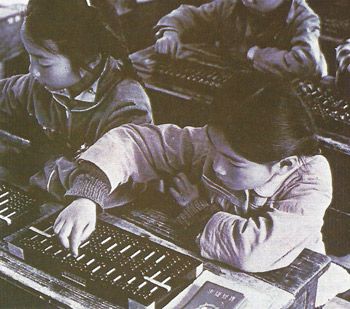 An abacus is a counting frame that started out, several thousand years ago, as rows of pebbles in the desert sands of the Middle East. The word appears to come from the Hebrew abaq ("dust") or the Phoenician abak ("sand") via the Greek abax, which refers to a small tray covered with sand to hold the pebbles steady. The familiar frame supporting rods or wires, threaded with smoothly running beads, gradually emerged in a variety of places and mathematical forms.

In Europe, there was a strange state of affairs. For more than 1,500 years, the Greek and the Romans, and then the Medieval Europeans, calculated on devices with a place-value system in which zero was represented by an empty line or wire. Yet the written notations didn't have a symbol for zero until it was introduced into Europe in 1202 by Fibonacci, via the Arabs and the Hindus.

The Chinese suan pan differs from the European abacus in that the board is split into two decks, with two beads on each rod in the upper deck and five beads, representing the digits 0 through 4, on each in the bottom. When all five beads in the lower deck are moved up, they're reset to the original position, and one bead in the top deck is moved down as a carry. When both beads in the upper deck are moved down, they're reset and a bead on the adjacent rod on the left is moved up as a carry. The result of the computation is read off from the beads clustered near the separator beam between the upper and lower deck. In a sense, the abacus works as a 5-2-5-2-5-2... -based number system in which carries and shifts are similar to those in the decimal system. Since each rod represents a digit in a decimal number, the capacity of the abacus is limited only by the number of rods on the abacus. When a user runs out of rods, she simply adds another abacus to the left of the row.

The Japanese soroban does away with the dual representations of "fives" and "tens" by having only four counters in the lower portion, known as "earth," and only one counter in the upper portion, known as "heaven." The world's largest abacus is in the Science Museum in London and measures 4.7 m (15.4 ft) by 2.2 m (7.2 ft).

In architecture, the abacus is a square or oblong level tablet placed above the capital of a column, and supporting the entablature.