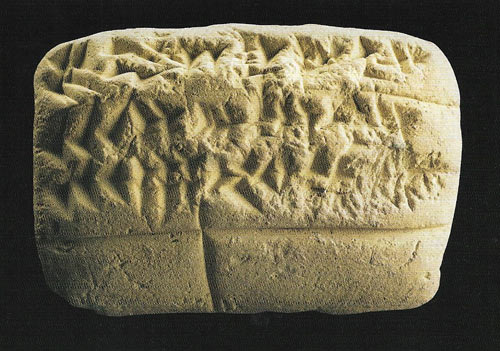 A Dilman clay tablet from c. 1450 BC that was used to calculate pay for forced labor.

Zero is the integer, denoted 0, which, when used as a counting number, indicates that no objects are present. It is the only integer that is neither negative nor positive: it is smaller than any positive number but larger than any finite negative number. It obeys

Division by zero is an undefined operation. Zero may be regarded as the identity element for addition in the field of real numbers.

The symbol "0" is so widely recognized that it is hard to imagine a world in which there was no clear way of indicating "zero". But that was the case until relatively recently on human history.

The earliest roots of the numeral zero stretch back 5,000 years to the Sumerians in Mesopotamia, who inserted a slanted double wedge between cuneiform characters for numbers, written positionally, to indicate a number's absence. The symbol changed over time as positional notation made its way to India, via the Greeks (in whose own culture zero made a late and only occasional appearance). Our word "zero" derives from the Hindi sunya for "void" or "emptiness," through the Arabic sifr, (which also gives us "cipher") and the Italian zevero. As a number in its own right, aside from it use as a position marker, zero took a much longer time to become established, and even now is not equal in status to other numbers: division by zero is not allowed.

In the 7th century AD, the Indian mathematician Brahmagupta drew up rules for dealing with zero as a number, not just a placeholder. Hindus adopted this idea in their original binary numbering system, and retained it when they later converted to the decimal system that is now used universally. The latter notation – including the placeholder – was then taken up by the Arabs, and reached the West in the twelfth century translations of a treatise on arithmetic by Persian mathematician al-Khowarizmi. The use of zero aroused controversy in the early Christian church, which questioned whether it was right to attribute a value to something that does not exist, and preferred to retain the Roman system (I, V, X, D, C, etc.), in which zero did not feature.

In the modern world, the value of zero remains literally nothing, but its figurative applications are both numerous and useful, particularly in science and mathematics. It is almost ubiquitous, it's only notable absence being from the Western calendar, which goes from 1 BC to 1 AD, with no year zero in between.