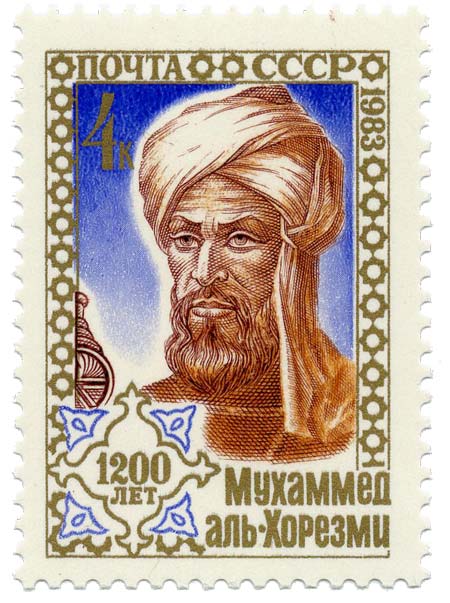 Al-Khowarizmi depicted on a 1983 Soviet stamp.

Al-Khowarizmi (Al-Khwarizmi) was an Arabic mathematician, born in Baghdad, who is widely considered to be the founder of modern algebra. He is credited with being the first to solve the quadratic equation ax 2 + bx + c = 0.

In his book Hindu with Hindu Numerals he described a number notation which was used at the time. Following the translation of this work (in the 13th century) the Hindu number system was adopted in Europe and is the one in use today. Consisting of ten digits, including zero, this number system is usually (in fact falsely) referred to as the Arabic system and the digits 0 through 9 are called the Arabic numerals.

Al-Khowarizmi believed that any mathematical problem, no matter how difficult, could be solved if broken down into a series of smaller steps. The word algorithm may have derived from his name.