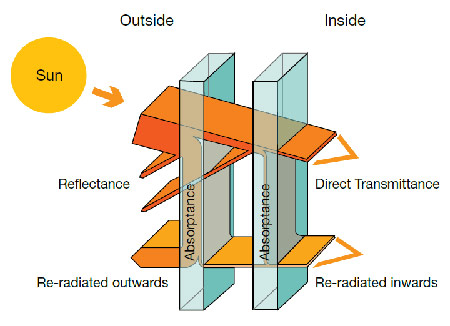 Reflectance, transmittance, and absorptance in glass.

Absorptance is the ratio of the luminous or radiant flux absorbed by a body to the flux falling on it. It is generally represented by the Greek letter α (alpha). By definition, in the case of a blackbody α = 1. Absorptance was formerly known as absorptivity.

For a layer of material the ratio of the flux absorbed between the entry and exit surfaces of the layer to the flux leaving the entry surface is the internal absorptance.

Solar absorptance and thermal emittance of spacecraft materials are critical parameters in determining spacecraft temperature control. A roof with a lower solar absorptance (typically lighter in colour) will reflect more solar radiation and keep the roofspace and dwelling cooler on a hot day.