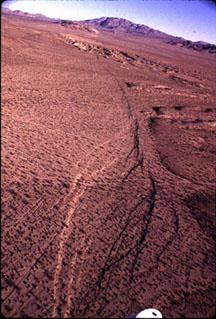 The Emerson fault, one of the segments that ruptured in the M7.2 1992 Landers, California earthquake. Photo credit: Kerry Sieh, Caltech.

An acive fault is a fault that is likely to be the site of another earthquake sometime in the future. Faults are commonly considered to be active if they have moved one or more times in the last 10,000 years. Mountains can be formed from repeated earthquakes and ground movements over thousands of years. Major active faults are found in the San Andreas Fault system of California, the Alpine Fault system of New Zealand, and the North Anatolian Fault system of Turkey, among others.