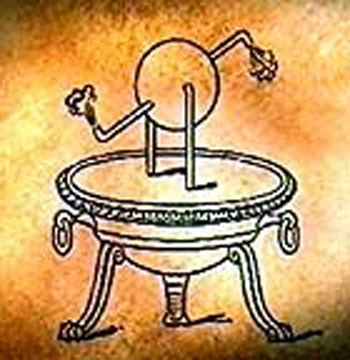 The aeolipile was an ancient device, invented by Hero of Alexandria (also known as Heron), which was based on the rocket principle of action and reaction, i.e. Newton's third law, and used steam as a propulsive gas. It consisted of a specially-made sphere on top of a water kettle. A fire below the kettle turned the water into steam which traveled through pipes to the sphere. Two L-shaped tubes on opposite sides of the sphere allowed the gas to escape, and in doing so gave a thrust to the sphere that caused it to spin. No practical use for the aeolipile was found at the time, it being an oddity similar to the clay bird of Archytas; however, it can be regarded as a precursor of the steam engine.