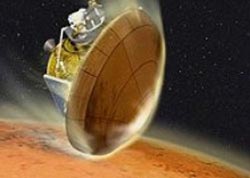 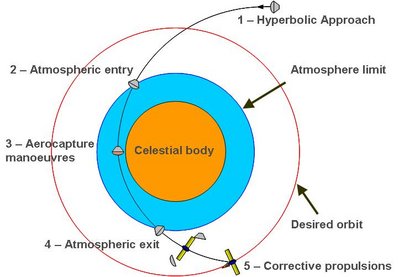 Aerobraking is the action of atmospheric drag in slowing down an object that is approaching a planet or some other body with an atmosphere. Also known as atmospheric breaking, it can be deliberately used, where enough atmosphere exists, to alter the orbit of a spacecraft or decrease a vehicle's velocity prior to landing. To do this, the spacecraft in a high orbit makes a propulsive burn to an elliptical orbit whose periapsis (lowest point) is inside the atmosphere. Air drag at periapsis reduces the velocity so that the apoapsis (highest point of the orbit) is lowered. One or more passes through the atmosphere reduce the apoapsis to the desired altitude at which point a propulsive burn is made at apoapsis. This raises the periapsis out of the atmosphere and circularizes the orbit.

Generally, the flight-time in the atmosphere is kept to a minimum so that the amount of heat generated and peak temperatures are not too extreme. For high-speed aeromaneuvering that involved large orbit changes, a heat-shield would be needed (Fig 1). However, small orbit changes can be achieved without this, as demonstrated by the Magellan spacecraft at Venus. In Magellan's case, the aerobraking surfaces were just the body of the spacecraft and its solar arrays. Aerobraking and aerocapture (see below) are useful methods for reducing the propulsive requirements of a mission and thus the mass of propellant and tanks. This decrease in propulsion system mass can more than offset the extra mass of the aerobraking system.

In the novel 2010: Odyssey Two by Arthur C. Clarke two manned spacecraft, one Russian and one Chinese, use aerobraking in Jupiter's atmosphere to slow down and position themselves for exploring Jupiter's moons. The film version of 2010 includes a dramatic sequence in which the Russian spacecraft is shown making its aerobraking maneuver.

Braking ellipses are a series of elliptical orbits which skim the atmosphere of a celestial body. Their purpose is to decelerate an orbiting spacecraft by exposing it to the aerodynamic drag of the atmosphere.

Aerocapture is similar to aerobraking, but distinct in that it is used to reduce the velocity of a spacecraft flying by a planet so as to place the spacecraft in orbit around the planet with a single atmospheric pass. Aerocapture could be very useful for planetary orbiters because it would allow a spacecraft to be launched from Earth at high speed, resulting in a short trip time, and then decelerated purely by aerodynamic drag at the target. Without aerocapture, a large propulsion system is needed to bring about the same reduction of velocity, thus reducing the amount of deliverable payload. However, aerocapture is a more extreme maneuver than aerobraking because it occurs at higher speeds and digs deeper into a planet's atmosphere.

An aerocapture maneuver would begin with a shallow approach to the planet, followed by a descent to relatively dense layers of the atmosphere. Once most of the needed deceleration has been achieved, the spacecraft would maneuver to leave the atmosphere (Fig 2). To allow for inaccuracy of the entry conditions and for atmospheric uncertainties, the vehicle would need to have its own guidance and control system as well as maneuvering capabilities. Most of the maneuvering would be done using the lift that the vehicle's aerodynamic shape provides. Upon exit, the heat-shield would be jettisoned and a short propellant burn carried out to raise the periapsis (lowest point of the orbit). The entire operation would require the vehicle to operate autonomously while in the planet's atmosphere.

Whereas aerobraking has been used on several missions to Mars and Venus, aerocapture has not so far been attempted. One of the proposals for a Neptune mission envisaged aerocapture as a possible way of entering orbit around the ice giant.