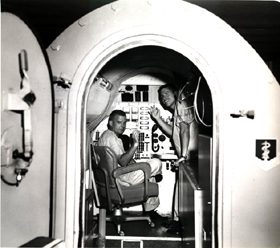 Air Force personnel performing experiments in the Two-Man Simulator at the School of Aerospace Medicine, Brooks Air Force Base, circa 1965.

Aerospace medicine is a branch of medicine that deals with the effects on the human body of flight and with the treatment of disorders arising from such travel. It has two sub-branches: aviation medicine, concerned with flight in Earth's atmosphere and under at least normal Earth gravity, and space medicine, concerned with flight beyond the atmosphere in which humans are typically exposed to a fraction of normal Earth gravity.

Aerospace medicine has its roots in the 18th-century physiological studies of balloonists, some of whom were physicians. In 1784, a year after the first balloon flight by French physicist Jean Pilâtre de Rozier (1756–85), Boston physician John Jeffries (1744–1819) conducted the first study of upper-air composition from a balloon. The first comprehensive studies of health effects during air flight were carried out by French physician Paul Bert (1833–86), professor of physiology at Paris University, who pioneered the use of oxygen to prevent hypoxia; he published his research on the effects of altered air pressure and composition on humans in 1878 under the title La pression barometrique. His work was continued in 1894 by the Viennese physiologist Herman Von Schrötter, who designed an oxygen mask with which meteorologist Artur Berson (1859–1942) set an altitude record of 9,150 m.

With the advent of the airplane, the first standards for military pilots were established. In 1917 physician Theodore Lyster (1875–1933) set up the Aviation Medicine Research Board which opened a research laboratory at Hazelhurst Field in Mineola, New York in Jan 1918. The School of Flight Surgeons opened in 1919 and a decade later the Aero Medical Association was founded under the direction of Louis Bauer (1888–1964). In 1934 facilities, including a centrifuge, were built at Wright Air Field to study the effects of high-performance flight on humans. Technical advances included the first pressure suit, designed and worn by American aviator Wiley Post in 1934, and the first anti-g suit, designed by Canadian medical researcher Wilbur Franks (1901–86) in 1942. In an effort to improve restraint systems for military jet aircraft, American flight surgeon John Stapp conducted an extraordinary series of tests in the 1950s on a rocket-powered sled. Aviation medicine was recognized as a specialty of preventive medicine by the American Medical Association in 1953 and saw its name change to aerospace medicine in 1963.