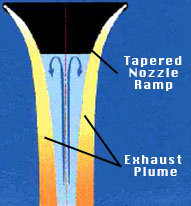 1. It automatically achieves close to maximum efficiency at both sea level and high altitude. A conventional engine would need to change the shape of its nozzle to achieve this.

2. The aerospike engine can change the direction of its thrust and steer by varying the rate at which fuel flows to different parts of the engine. No moving parts are needed, unlike in a conventional engine.