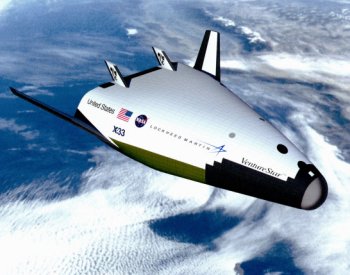 The X-33 was a half-scale technology demonstrator for the VentureStar reusable single-stage-to-orbit launch vehicle proposed by Lockheed Martin. The X-33 design was based on a lifting body shape with two revolutionary linear aerospike engines and a rugged metallic thermal protection system. The vehicle also had lightweight components and fuel tanks built to conform to the vehicle's outer shape. Time between X-33 flights was normally to have been seven days, but the program had hoped to demonstrate a two-day turnaround between flights during the flight-test phase of the program. The X-33 was to have been an unpiloted vehicle that took off vertically like a rocket and landed horizontally like an airplane. It was to have reached altitudes of up to 50 miles (80 km) and high hypersonic speeds.

The X-33 program began in 1996, was managed by the Marshall Space Flight Center, and was to have been launched at a special launch site on Edwards Air Force Base. However, it ran into development problems with the lightweight composite materials from which the vehicle's propellant tanks were intended to be made. Budget constraints finally led NASA to cancel the X-33 and related X-34 programs in 2001.