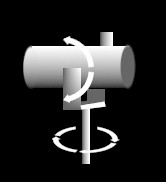 To track an object across the sky with such an arrangement demands that the telescope move simultaneously around two axes – a complication that, in the past, led to an overwhelming preference for equatorial mountings. However, computer control has made altazimuthal operation so much easier that altazimuthal mountings, which are simple to construct, have been adopted almost universally for large modern instruments. The vertical axis is a fork that holds the two ends of the horizontal axis, and the horizontal base can be spun around a vertical axis at its center. Because there are no difficult angles to sustain, it takes a less massive, less expensive mount to support a given size of telescope. The restricted range of motion needed to cover the whole sky leads to another substantial saving in the size of the dome needed. Drawbacks, in addition to dual-axis tracking, are that the tracking rate varies with position in the sky and that the field of view rotates, which, though not a problem for point sources such as stars, must be addressed for any extended source by either rotating the instrument or by de-rotating the image.

A popular version of the altazimuth mount used widely by amateur astronomers is the Dobsonian.