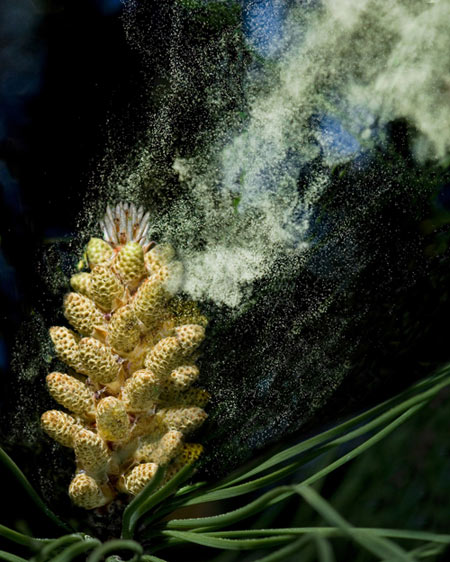 Release of pollen by a conifer.

Anemophily is a type of pollination that relies on the wind to carry the pollen. Most grasses and many trees have anemophilous flowers. Such flowers lack scent and nectar, and have small, inconspicuous, or nonexistent petals. They produce enormous amounts of tiny pollen grains (hence wind-pollinated plants may be allergenic, unlike animal-pollinated plants, which seldom are). Anemophilous flowers have large feathery stigmas to catch the pollen grains. Male and female flowers are usually separate, as is the case with catkins of many trees, which bloom before the trees come into leaf. Anemophilous plants grow in low-diversity stands and are among the taller species in their communities. Insects may visit them to collect pollen but are not the most effective pollinators and exert little selection pressure on them.

Many of the world's most important crop plants are wind-pollinated. These include wheat, rice, corn, rye, barley, and oats. Many economically important trees are also wind-pollinated, including pines, spruces, firs, and many hardwood trees, including several species cultivated for nut production.