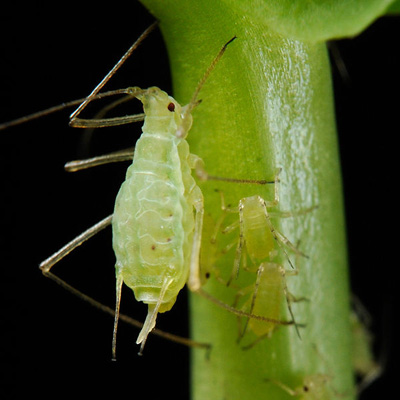 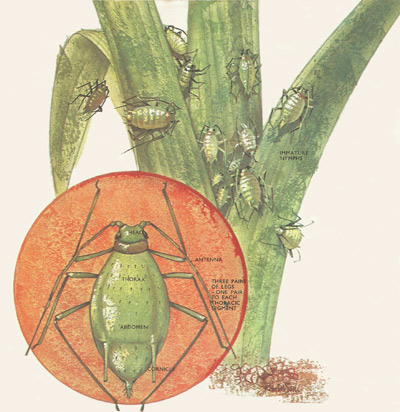 The Rose Aphids pass the winter as eggs upon rose trees. In summer, they invade tulips, irises, nettles, and more important, the potato plant. Young are called nymphs. They soon reach maturity and themselves reproduce. Inset: the general structure and appearance of the aphid. 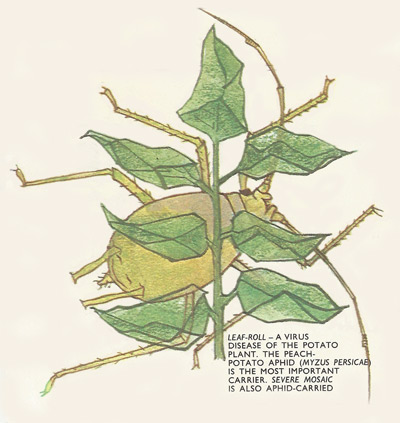 By sucking the sap from plant conducting tissues, aphids deprive the plant of essential foods. Leaves wilt, curl at the edges, become malformed and discolored. Flowers are damaged and fruits remain small. Aphids attacking roots cause deformity and general unhealthiness in the plant.

Punctures left by the aphid's stylets in the surface of the plant give bacteria, viruses, and fungi direct access into the internal tissues. In fact, aphids have been proved in some cases, to carry certain virus diseases from plant to plant. 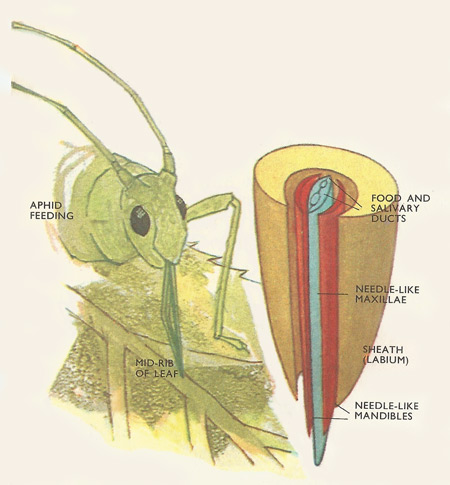 The mouth parts of aphids are adapted for piercing plant surfaces and sucking sap. The two maxillae come together as shown to form canals – one for injecting saliva, one for absorbing food. 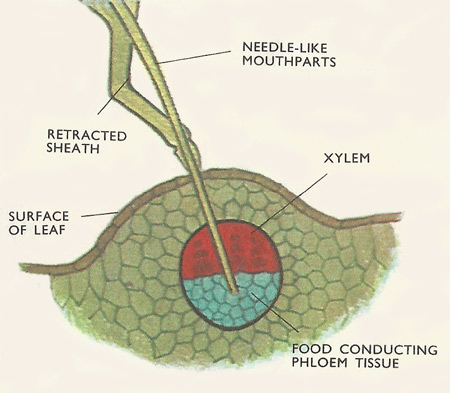 The stylets formed by the mandibles and maxillae plunge deep into plant stems and leaf mid-ribs. They locate the phloem – special tissue used for conducting plant food material.

Aphids, also called greenfly, are sap-feeding insects of the family Aphididae, order Homoptera. They have needle-like mouthparts with which they pierce plant tissue, the pressure within this forcing the sap into the insect's gut. Because of the damage caused by their feeding and because many species carry harmful viruses, aphids are one of the world's great crop pests.

There are numerous different species of aphid. Each species has its own preferences for plant hosts. In fact each species usually has several plant hosts, and migrates periodically from one to another. The Bean Aphis or blackfly (Aphis fabae) for instance, migrates from the Spindle tree to the herbaceous plants such as the bean, beetroot, and parsnip. The Grain Aphis (Aphis avenae) moves from wild grasses to wheat and other cereal crops. Some species do stay on the same plant but move periodically from root to stem.

Like all insects, the body of the aphid can be divided into three sections: head, thorax, and abdomen. The overall appearance is usually pear-shaped, but the color varies from species to species – greens, browns, reds, blacks, grays. The length of most aphids is only about 2 or 3 mm (less than 0.5 in). The three pais of legs, one to each thoracic segment, are long in comparison with the body. They are not, however, adapted for leaping; aphids are very sluggish walkers. Some individuals may have two pairs of transparent wings and are capable of flight.

The mouth parts on the head are adapted to piercing plant surfaces and sucking liquid foods from the tissues inside. The two jaws (mandibles) are needle-like. They come together to form a piercing outer stylet. The two secondary jaws (maxillae) form an inner stylet surrounding two canals. At rest, the needles are drawn up under the head and protected by an outer sheath formed from the lower lip (labium). When feeding begins the sheath is withdrawn and the needles are plunged into the food-conducting tissues of the plant. Saliva passes down one of the canals inside the needles and partially digests the plant fluids. Muscular action then pumps the sap up the other canal into the mouth.

The aphid's diet is very rich in carbohydrates. Excess sugars taken in are extruded through the anus as a sweet fluid called honeydew. This is a major food source for some ants and other insects. It used to be thought that honeydew was a secretion of the cornicles – a pair of rod-like structures that can be seen on the upper surface of the abdomen. Secretions do in fact pass out of the cornicles but not honeydew. Instead a white waxy fluid is emitted that helps to protect aphids from their many enemies.

The aphid life cycle is complex, so that within a species there may be at any one time a diversity of forms: winged and wingless, reproducing sexually or by parthenogenesis.

The Bean Aphis is a common pest in many parts of the world. Its cycle is fairly typical of all aphids. At the end of the summer, the female lays eggs quite normally. The eggs in the case of the Bean Aphis are attached to the back of the Spindle tree or the Sterile Guelder rose. Winter passes and with spring, the eggs hatch. Only females emerge. Soon these females themselves reproduce but parthenogenically. Usually, an egg has only half a set of chromosomes. The other half is derived from the male when the egg is fertilized. In parthenogenesis no mating occurs. The egg cells has the full number of chromosomes and does not have to be fertilized.

The young produced in this way are genetically identical to their mothers. They are all female and further they are born alive. The number produced by each female is about ten – a few each day.

The members of this new generation are all wingless but when they in turn reproduce by parthenogenesis a race of winged females emerges. They are capable of flying off and colonizing more territory. Bean plants are commonly the new hosts but other possible plant hosts include dock, spinach, thistle, mangold, and sugar-beet.

Succeeding generations of females are produced by parthenogenesis on the new hosts though the number of winged forms varies in different generations. On an average between 10 and 20 generations are produced each summer. At the rate of ten young per generation, a single aphid can give rise to hundreds of millions of insects. Bad weather and natural enemies keep their numbers down.

Towards autumn male and female individuals capable of sexual reproduction are produced. The sex cells of these forms (eggs and sperm) come to have only half a set of chromosomes. When the egg is fertilized the two types of cell combine giving a full complement of chromosomes again.

The males are winged and fly eventually back to the Spindle tree. Sexual females are not winged. They are produced by winged, non-sexual females that fly to the Spindle tree from neighboring herbaceous hosts. Fertilized eggs are laid and in the spring the cycle begins again. The reason for the sudden production of sexual forms after a period of parthenogenic reproduction is uncertain. Light, food, and temperature all seem important.

In 2010, it was discovered that aphids are capable of manufacturing carotenes in their bodies, rather than, as is the case in all other animals, obtaining these substances ready-made from their food.[1} Aphids contain large amounts of carotenes, and it is these pigments that give aphids their distinctive color. The body color can change depending on environmental conditions; for example, in a particular species, cold may favor green aphids, while warmer condition encourage a change to orange and over-population and limited resources a tendency to be white.

In plants, carotenes function as photosynthetic pigments so it was natural to ask if the high levels of self-generated carotenes in aphids might also be involved in light harvesting. Sure enough, researchers found that aphids containing the highest concentration of carotenes (the green ones) also had the highest levels of ATP – the the chemical currency of energy transfer in all living things. Moreover, ATP production rose when the orange insects, contain an intermediate level of carotenoids, were placed in light, and fell when they were moved into darkness.[2] The indication is that aphids have a primitive ability to carry out photosynthesis. More work is now needed to verify this and to answer the question as to why they have this ability.