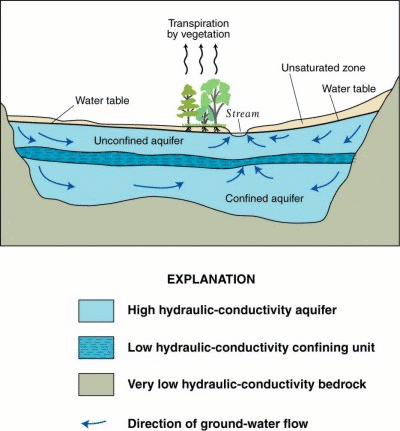 An aquifer is a subsurface layer or layers of rock, often sandstone or limestone, of sufficient porosity and permeability to allow either a significant flow of groundwater or the abstraction of significant quantities of groundwater by wells or springs. Much of the human population depends on aquifers for its water supply.

An aquifer acts as a groundwater reservoir when the underlying rock is impermeable. This may be tapped by wells for domestic, agricultural or industrial use. A serious environmental problem arises when the aquifer is contaminated by the seepage of sewage or toxins from waste dumps. If the groundwater in coastal areas is over-used salt water can seep into the aquifer.

An artesian aquifer is an aquifer in which groundwater is confined under pressure significantly greater than atmospheric pressure. This pressure, called artesian pressure, is generally due to the weight of water at higher levels in the same zone and is sufficient to cause water to rise above the level of the aquifer in a well or natural fissure. An artesian aquifer is bounded above and below by confining beds of less permeable rock.