Groundwater seeps through the zone of intermittent saturation (1) until it reaches an impermeable layer above which it forms the zone of saturation or aquifer (2, 10). The upper surface of the aquifer forms the water table (3, 13), above which is the capillary fringe (6). Wells (7) must be sunk to the water table because the capillary fringe is not saturated. Impermeable dikes (8) block the flow of groundwater. In uniform material the water follows paths (4) that curve down and up again toward the nearest stream. If an aquifer is part of a series of strata including several impermeable layers (11) a perched water table (12) may result. If it lies between two impermeable strata it is said to be confined (14). Its recharge area (15) is where water enters the confined aquifer. A stream below the water table is called a gaining stream (5) while a stream flowing above it is known as a losing stream (9) because it loses water by seepage.

Fig 1. Springs appear where the water table meets the surface. (A) Springs may occur where a fault brings an aquifer into contact with an impermeable layer. (B) Water pressure creates artesian springs at points of weakness. (C) Water seeps through jointed limestone until it emerges above an impermeable layer. (D) Springs form where permeable strata overlay impermeable rock. (E) An impermeable barrier may lead to the formation of a spring line. 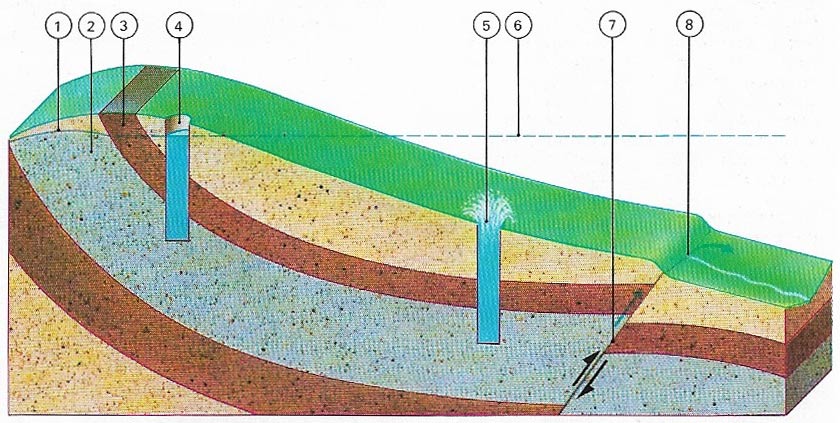 Groundwater enters permeable rocks through what is called the zone of intermittent saturation. This layer may retain groundwater after continued rain but soon dries out. Beneath this lies a rock zone where the pores or crevices are filled with water. It is called the zone of saturation and usually begins within 30 m (98 ft) of the surface, extending downward until it reaches impermeable rock through which water cannot percolate. This impermeable rock layer, lying below the water-holding layer, or aquifer, is called a groundwater dam.

The top of the saturated zone is called the water table. This is not a level surface, It is often arched under hills, but beneath plains it generally lies closer to the surface. The water table also varies in level during the year, depending on the amount of rainfall.

In some places the water table intersects the surface, forming such features as oases in desert hollows, swamps, lakes, and springs. Springs (Fig 1) are gushes or seepages of water that may occur along the base of a hillside or in a valley in the hills. They are found where the water table or an aquifer appears at the surface or where the aquifer is blocked by an impermeable rock such as a volcanic dike. Spring water is usually fresh and clean because it passes through the fine pores of rocks such as sandstones where impurities are filtered out in much the same way as domestic water is purified by sand filtration.

Limestone is not a porous rock but it is permeable – that is, groundwater can seep through the maze of fissures, joints, and caves in the rock. These apertures are enlarged by rainwater containing dissolved carbon dioxide – a weak carbonic acid that dissolves limestone. In limestone, groundwater is not filtered in the same way as in porous rocks. In the late 1800s epidemics of cholera and typhoid often occurred in France in areas where springs emerged from limestone areas. It was finally established that the spring water had been contaminated miles away by rubbish thrown into potholes

Some springs contain so much mineral substances in solution that their water is used for medicinal purposes and spa towns have grown up around them. Occasionally these springs are thermal.

The lowest level of the water table, reached at the driest time of year, is called the permanent water table. Wells must be drilled to this level if they are to supply water throughout the year. In artesian wells (Fig 2) water is forced to the surface by hydrostatic pressure – this results from the rim of the well being below the level of the water table in the catchment area. Artesian water is obtained from porous sandstone aquifers that underlie the Great Artesian Basin of Australia. These aquifers are supplied with water from the rain that falls on the Eastern Highlands.