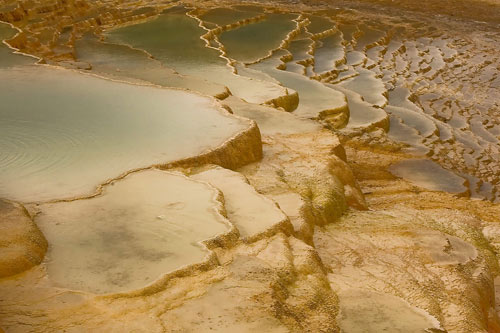 Cross-section of a hillside, showing how rain-water becomes a mineral-water spring. 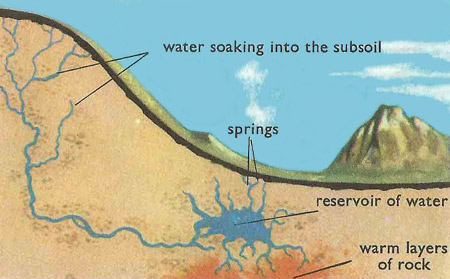 Warm rock heats the waters of a thermal spring. 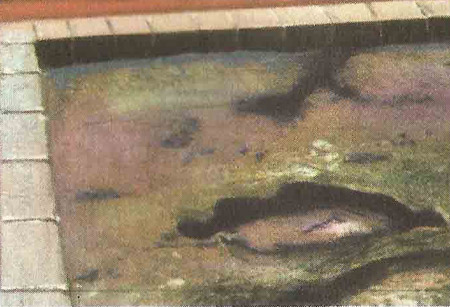 Bath containing mud from a hot spring, with growths of algae.

A spring is a naturally occurring flow of water from the ground. This may be, for example, an outflow from an underground stream; but most often a spring occurs where an aquifer saturated groundwater intersects with the Earth's surface. Such an aquifer, if confined above and below by aquicludes, may travel for hundreds of kilometers underground before emerging at the surface, there, perhaps, in desert areas giving rise to oases. Spring water is generally fairly clean, since it has been filtered through the permeable rocks; but all spring water contains some dissolved minerals.

When rain falls, some of it runs off as streams and rivers; some evaporates back into the air. But some soaks into the ground, through layers of the earth's crust that are permeable. Lower down, there may be an impermeable layer – that is, one through which the water cannot pass. The water will gather above this layer, and sometimes flows along it, below the ground, until it comes out again at the surface of a hillside, forming a spring which is often a source of pure, drinkable water.

Sometimes, though, as it flows below the ground, the water may pass among rock containing mineral substances that will dissolve in water. Then, when it reaches the surface, it will no longer be pure but will contain some of these minerals in solution.

Often the minerals dissolved are limestone or gypsum – that is, calcium carbonate or sulphate. Then the water is hard; it will not easily form a lather with soap and may have to be softened by various means before it can be used.

If the water contains other dissolved substances it may have valuable properties as a medicine. There are mineral springs of this kind in many places in the world, and some of them have been found so useful for treating rheumatism, gout, and various internal disorders that whole towns have been built in those places, so that people can go there for medical treatment.

Some mineral springs contain large quantities of carbon dioxide, which makes them sparking, or effervescent. Other curative springs contain chlorides, carbonates, and sulphates or sodium, calcium, magnesium, and iron, and some sulphides.

Most springs, including mineral springs, are cool when they come out of the ground, but some are warm or even hot. Usually these are springs whose waters have descended to a considerable depth before rising again to the surface. This may happen where there are strata of rocks below the surface that are in fact impermeable, but which contain cracks or fissures. The water soaking down from the surface penetrates these cracks to a great depth before it is forced up again through other cracks by the pressure of other water coming down from above. As we know, the temperature of the earth increases as we descend below the surface; so these hot springs are formed of water which has been running over layers of warm or hot rock far below the place where they emerge.

There is a spring of this kind at Bath, the only hot spring in England, which has been famous since Roman times and gives the town its name. Here 400,000 gal of water at a temperature of 50°C. have come gushing our from the depths of the earth every day for centuries. Rheumatism and other illnesses are treated by taking baths in the hot springs, which, like mineral springs, contain dissolved minerals with curative properties.

Another kind of hot spring occurs in volcanic regions, where water and steam gush out of the earth with great force. The famous geysers of Iceland and New Zealand are of this type.

Sometimes the waters of hot springs in volcanic regions contain not only dissolved minerals but solid minerals. These are crushed and powdered fragments of rock which have become mixed with the water as it boiled and bubbled violently in the depths of the earth. The spring then comes out at the surface not as water but as thick, hot mud. This, too, is used for medicinal baths; sometimes it is led into vats, where conditions favour the growth of the simple plants called algae. These mixed minerals and vegetable mud-baths are also used in the treatment of various illnesses.

In some springs the minerals in the water only stay in solution because the water contains carbon dioxide, and is able to dissolve substances like calcium carbonate, ore limestone. On reaching the air, some of the carbon dioxide is lost, and dissolved substances come out of the solution. There are several springs of this kind in Britain; objects left in the spring become coated with limestone, and looks as if they had been turned to stone.