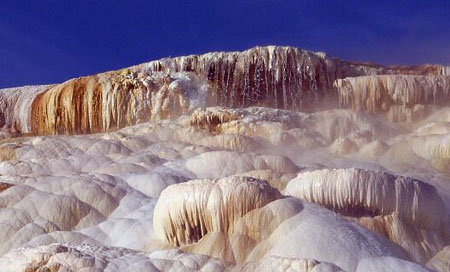 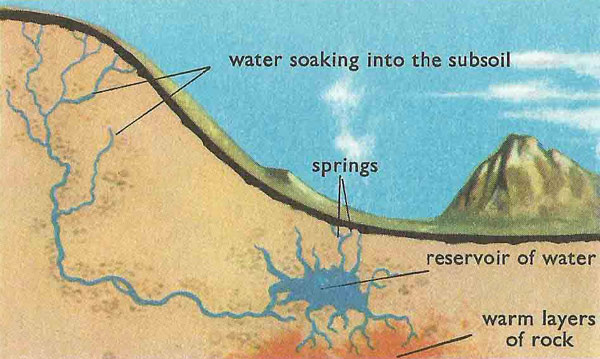 Warm rocks heat the waters of a thermal spring.

A hot spring, also known as a thermal spring, is a spring supplied by underground water heated usually by vapor from magma, and most common in recently active volcanic regions. Most springs, including mineral springs, are cool when they come out of the ground. In the case of hot springs, however, the water has usually descended to a considerable depth before rising again to the surface. This may happen where there are strata of rocks below the surface that are in fact impermeable, but which contain cracks or fissures. The water soaking down from the surface penetrates these cracks to a great depth before it is forced up again through other cracks by the pressure of other water coming down from above. As we know, the temperature of the Earth increases as we descend below the surface; so these hot springs are formed of water which has been running over layers of warm or hot rock far below the place where they emerge.

The temperature and rate of discharge of hot springs depend on factors such as the rate at which water circulates through the system of underground channelways, the amount of heat supplied at depth, and the extent of dilution of the heated water by cool ground water near the surface. The water contains dissolved minerals that may form terraces around the the outlet. See also geyser.

Hot springs are found in many parts of the world where hot rocks lie relatively close to the surface, including Iceland, parts of New Zeland, and Yellowstone National Park in the US. The only hot spring in England, at Bath, has been famous since Roman times and gives the city its name. Here 400,000 gal of water at a temperature of 49°C (120°F). have come gushing our from the depths of the Earth every day for centuries. Rheumatism and other illnesses are treated by taking baths in the hot springs, which, like mineral springs, contain dissolved minerals with supposed curative properties.

Sometimes the waters of hot springs in volcanic regions contain not only dissolved minerals but solid minerals. These are crushed and powdered fragments of rock which have become mixed with the water as it boiled and bubbled violently in the depths of the earth. The spring then comes out at the surface not as water but as thick, hot mud. This, too, is used for medicinal baths; sometimes it is led into vats, where conditions favour the growth of the simple plants called algae. These mixed minerals and vegetable mud-baths are also used in the treatment of various illnesses.