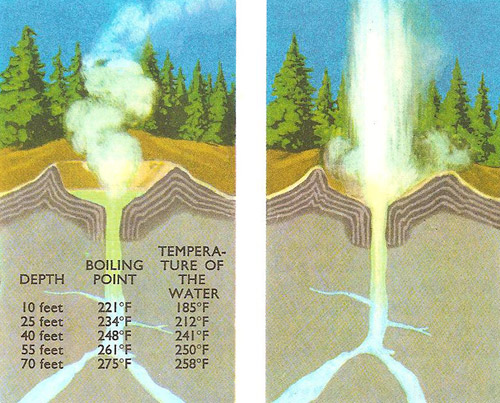 Cross-section of a geyser showing basin and feeding pipe.

A geyser is a hot spring, found in currently or recently volcanic regions, that intermittently jets superheated water and steam into the air. It consists essentially of a tube leading down to a hot source. Groundwater accumulates in the tube, that near the bottom being kept from boiling by pressure of the cooler layers above. When the critical temperature is reached, bubbles rise, heating the upper layers which expand and well out of the orifice. This reduces the pressure enough for substantial steam formation below, with subsequent eruption. The famous Old Faithful used to erupt every 66½ min, but has recently become less reliable.

Some geysers erupt from cold or warm springs and are powered by gas pressure instead of the actual boiling of water.

Hot springs and geysers are common only in areas of volcanic activity. They occur in South America, Japan, the Malay Archipelago, and Italy, but are mainly concentrated in Iceland, New Zealand, and Yellowstone National Park, Wyoming, in the United States.

There are thousands of hot springs in Iceland, and the name of the most famous spring there, 'Geyser' (which in Icelandic means "to gush or rush forth"), is now used for all springs which spout steam and water into the air. In no other part of the world is thermal (hot) spring activity so intense and spread over such a wide area as in Iceland. In one part of south-west Iceland more than 1,000 springs are crowded within just one square mile. Some are short-lived and may last no longer than a few days, while others are known to have been in existence for hundreds of years.

The temperature of the water when it comes to the surface may be up to 2 or 3 degrees above boiling point, and this natural hot-water supply has been put to excellent use in Iceland. For many hundreds of years it had been used for bathing and washing, and in the 1930s engineers began to pipe the hot water to the capital, Reykjavik.

At first the hot water went to a few houses and institutions, but by 1945 the system had been extended to include most of the built-up area. The water comes out of the taps at a temperature between 175° and 190°F. This new kind of heating has meant the disappearance of the heavy pall of smoke which used so often to hang over Reykjavik during the long Icelandic winter.

The thermal springs also supply water to open-air swimming pools at a temperature of about 85°F. Another use for the hot water is to heat greenhouses in which a great variety of vegetables and flowers are grown. This is a boon to a country where the climate only allows crops such as hay, potatoes, and turnips to be grown.

The heat of the thermal springs is due to volcanic activity. The word 'volcano' comes from 'Vulcan', who was the Roman god of fire and metal-working. Sometimes a large mass of molten rock is trapped not far below the surface of the earth where it takes a very long time to cool. When water in the ground comes into contact with this hot mass it is heated, and the result will be the formation of hot springs or geysers.


What makes a geyser?

A geyser is a hot spring which, from time to time, shoots out great quantities of hot water and steam. The water may be forced up to a height of more than 50 ft. The great Geyser of Iceland is a typical example. It consists of a circular pool about 60 ft in diameter and about 4 ft deep. A shaft measuring about 10 ft in diameter and about 70 ft in depth leads out of the bottom of this pool.

In a hot spring, which does not erupt, the water is of a more or less constant temperature. This is because it cools about as fast as it is heated. In a geyser the heat is not lost as fast as it is acquired. Water far below the surface of a geyser pool is being constantly heated by contact with the molten volcanic mass. The water gets hotter and hotter until at last it reaches boiling point far below the surface. Water normally boils at 212°F, but under pressure greater temperatures must be reached before it will boil and turn into steam. For example, the water will boil at about 248°F at a depth of 40 ft, or 275°F at 70 ft. When boiling point is reached, the water is suddenly changed into steam; it expands, and lifts the column of water above it. This causes a slight reduction in pressure so that more water boils and becomes steam. Quite suddenly, there is enough steam to force the water out of the shaft, 50 ft or more into the air.

It is characteristic of geysers that they erupt at intervals. After the water and steam has shot into the air, the cooler water flows back into the geyser shaft, and the whole process begins all over again. Sometimes the geyser shaft is connected with a series of underground caves which are often to be found in lava flows. Then there is more water to be shot out, and the discharge will be a long one. Some geysers are remarkably constant performers. The famous 'Old Faithful' in Yellowstone National Park sends a column of water 95 to 130 ft into the air for about 5 minutes at 65-min intervals. A neighboring geyser, 'The Giantess', attracts many tourists even though there are nearly three weeks between each eruption. This geyser sends a column of water some 50 to 60 ft into the air and in the middle of it a thin jet of water rises to a height of 250 ft. This performance goes on for an hour and is an impressive sight.

Geysers, like hot springs, have a variable life span. They are apt to break out after a volcanic eruption. Not less than seven gigantic geysers were born near Tarawera in New Zealand after the eruption there in 1886. Water, steam, stones, and mud were shot 600 to 800 ft into the air.

the water of hot springs and geysers frequently contains large quantities of dissolved material. If there is an overflow from the pool, this material is generally deposited around the margins, but sometimes it collects in the basin and even in the pipe of a geyser. If the hot water has passed through limestone, great terraces of deposit may form which look like frozen waterfalls. The superheated vapor in the depths of some springs is even able to dissolve quartz (a hard mineral), and this can leave a lining on the basin and shaft of a geyser, as well as superficial deposits on the surface. This material is known as 'siliceous sinter'.

Some hot springs are heavily charged with rock debris, like thin mud. These pools are known in the US as paint pots, because of the vivid colors which come from the chemical reactions caused by prolonged cooking.