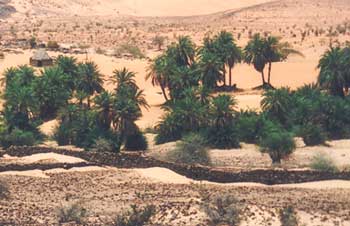 An oasis is a fertile area in the midst of a desert. The water source is generally a spring; though in the Sahara many oases have sprung up around wells. An oasis may occur at the point where a river flowing from a wetter region crosses the desert on its way to the sea, such as the Nile in North Africa or the Indus in South Asia. They may be hundreds of square kilometers in area, or merely a few trees clumped together. Most Saharan oases contain large numbers of date palms, and there may also be many fields of cereals, vegetables, and fruits. There is often a settlement at the oasis, sometimes with as many as 30,000 inhabitants.