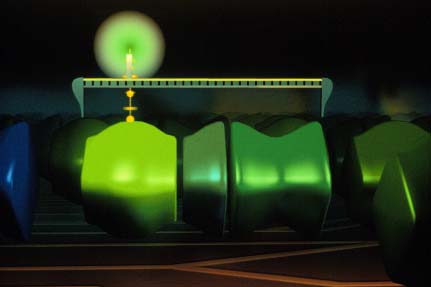 Artificial life is a life-like pattern that may emerge from a cellular automaton and appear organic in the way it moves, grows, changes shape, reproduces, aggregates, and dies. It is distinct from synthetic life, which refers to the creation of new organisms or new biological functions and systems not found in nature.

Artificial life was pioneered by the computer scientist Chris Langton (see Langton's Ant), and was researched extensively at the Santa Fe Institute. It has been used to model various complex systems such as ecosystems, the economy, societies and cultures, and the immune system. The study of artificial life, though controversial, promises insights into natural processes that lead to the build-up of structure in self-organizing systems.

In a more general sense, artificial life is life that has not evolved through the normal slow biological channels. It is generally taken to mean either computer-resident entities that display certain properties, including the ability to evolve and reproduce, normally associated with corporeal life-forms, or sophisticated robots and androids that may someday take their place alongside biological organisms. The strong claim of artificial life is that emergent computational patterns, such as those, for example, in Thomas Ray's Tierra system, do not simulate life but realize, in instantiate, the very phenomenon. Therefore, by observing the behavior and evolution of these patterns we may be able to learn something of the general principles that govern life wherever it appears. In the field of intelligent robotics, NASA mission planners have already considered the case for future exploratory devices, built along the lines of insects and other relatively simple creatures, that would be adept at investigating unusual environments. The possibility cannot be discounted that some extraterrestrial life may be artificial and perhaps even more sophisticated and more widespread than its biological creators.

In July 2012, bioengineers in the US have built the first computer model of a complete bacterium. The breakthrough means that researchers will be able to modify an organism's genome, or simulate new life-forms, using software before carrying out potentially risky experiments on real pathogens.