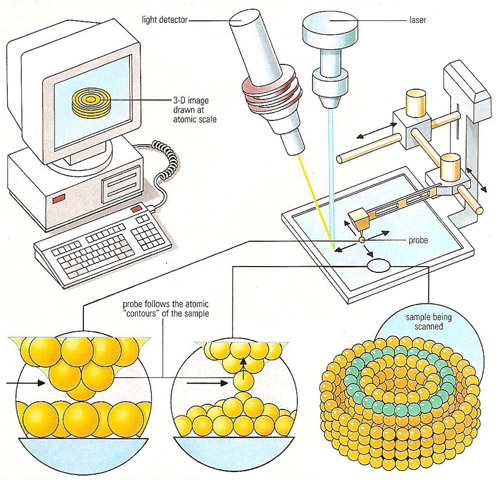 An atomic force microscope (AFM) is a type of microscope that depends on the forces between atoms to produce an image of a surface. A spring-loaded arm holds a tiny piece of diamond in contact with the surface while it scans across it. The probe is lowered or raised to keep the tracking force constant, and the necessary movements are analyzed by a computer to produce a contour map of the surface displayed on the computer screen. It can scan non-conducting biological specimens, unlike the scanning tunneling microscope which which works only with metallic samples.

The atomic force microscope (AFM) is used in nantotechnology. As the stylus-like probe "reads" the sample, a laser beam is deflected and, via a light sensor, a 3-D image is produced on a computer screen.

The AFM is also capable of manipulating individual atoms into any position required.