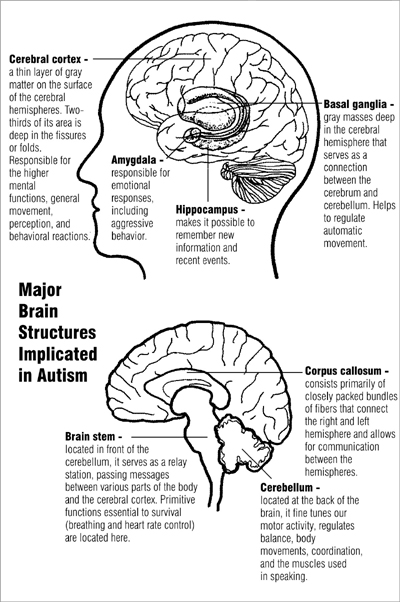 Autism (sometimes called "classical autism") is the most common condition in a group of developmental disorders known as the autism spectrum disorders (ASDs). Other ASDs include Asperger syndrome and Rett syndrome.

Autism is characterized by three distinctive behaviors. Autistic children have difficulties with social interaction, display problems with verbal and nonverbal communication, and exhibit repetitive behaviors or narrow, obsessive interests. These behaviors can range in impact from mild to disabling. Autism varies widely in its severity and symptoms and may go unrecognized, especially in mildly affected children or when more debilitating handicaps mask it. Scientists aren't certain what causes autism, but it's likely that both genetics and environment play a role.


Is there any treatment?

There is no cure for autism. Therapies and behavioral interventions are designed to remedy specific symptoms and can bring about substantial improvement. The ideal treatment plan coordinates therapies and interventions that target the core symptoms of autism: impaired social interaction, problems with verbal and nonverbal communication, and obsessive or repetitive routines and interests. Most professionals agree that the earlier the intervention, the better.

For many children, autism symptoms improve with treatment and with age. Some children with autism grow up to lead normal or near-normal lives. Children whose language skills regress early in life, usually before the age of 3, appear to be at risk of developing epilepsy or seizure-like brain activity. During adolescence, some children with autism may become depressed or experience behavioral problems. Parents of these children should be ready to adjust treatment for their child as needed.