Biodiesel and the carbon cycle. 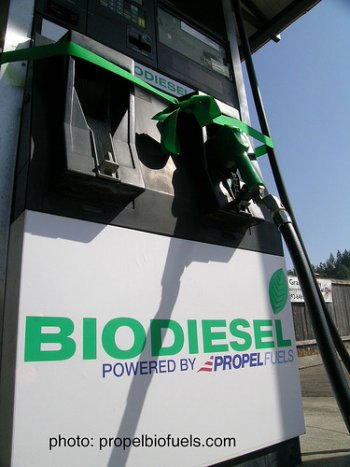 Biodiesel is a type of biofuel that can be used in place of diesel fuel in modified engines. Biodiesel, which consists of fatty acid alkyl esters, is a cleaner burning diesel replacement fuel produced (by a process known as transesterification) from natural, renewable sources such as new and used vegetable oils and animal fats. A common form of biodisel is rapeseed methyl ester (RME), which is derived from rapeseed oil.

Just like petroleum diesel, biodiesel operates in compression-ignition engines. Blends of up to 20% biodiesel (mixed with petroleum diesel fuels) can be used in nearly all diesel equipment and are compatible with most storage and distribution equipment. These low-level blends (20% and less) generally do not require any engine modifications; however, users should consult their OEM and engine warranty statement. Biodiesel can provide the same payload capacity as diesel.

Higher blends, even pure biodiesel (100% biodiesel, or B100), may be able to be used in some engines (built since 1994) with little or no modification. However, engine manufacturers are concerned about the impact of B100 on engine durability. Additionally, B100 is generally not suitable for use in low temperature conditions. Transportation and storage of B100, however, require special management.

The use of biodiesel decreases the solid carbon fraction of particulate matter (since the oxygen in biodiesel enables more complete combustion to carbon dioxide) and reduces the sulfate fraction (biodiesel contains less than 15 ppm sulfur), while the soluble, or hydrocarbon, fraction stays the same or increases. Therefore, biodiesel works well with emission control technologies such as diesel oxidation catalysts (which reduce the soluble fraction of diesel particulate but not the solid carbon fraction).


How is biodiesel made?

Biodiesel fuel can be made from new or used vegetable oils and animal fats, which are nontoxic, biodegradable, renewable resources. Fats and oils are chemically reacted with an alcohol (methanol is the usual choice) to produce chemical compounds known as fatty acid methyl esters. Biodiesel is the name given to these esters when they're intended for use as fuel. Glycerol (used in pharmaceuticals and cosmetics, among other markets) is produced as a coproduct.

Biodiesel can be produced by a variety of esterification technologies. The oils and fats are filtered and preprocessed to remove water and contaminants. If free fatty acids are present, they can be removed or transformed into biodiesel using special pretreatment technologies. The pretreated oils and fats are then mixed with an alcohol (usually methanol) and a catalyst (usually sodium hydroxide). The oil molecules (triglycerides) are broken apart and reformed into methylesters and glycerol, which are then separated from each other and purified.

Approximately 55% of the biodiesel industry can use any fat or oil feedstock, including recycled cooking grease. The other half of the industry is limited to vegetable oils, the least expensive of which is soy oil. The soy industry has been the driving force behind biodiesel commercialization because of excess production capacity, product surpluses, and declining prices. Similar issues apply to the recycled grease and animal fats industry, even though these feedstocks are less expensive than soy oils.

Because little fossil energy is required to move biodiesel, it is a substitute or extender for traditional petroleum diesel, and special pumps or high pressure equipment for fueling are not needed. In addition, it can be used in conventional diesel engines, so special vehicles or engines to run biodiesel do not need to be purchased. However, users should always consult with the OEM and engine warranty statement before using biodiesel.

Since biodiesel can be used in conventional diesel engines, the renewable fuel can directly replace petroleum products; reducing the country's dependence on imported oil.

Biodiesel offers safety benefits over petroleum diesel because it is much less combustible, with a flash point greater than 150°C, compared to 77°C for petroleum diesel. It is safe to handle, store, and transport.