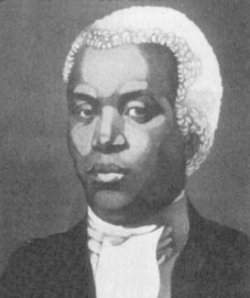 Benjamin Banneker was an astronomer often considered the first African-American man of science. He was born in Baltimore County, Maryland, the son of a freed slave and of Mary Banneker, daughter of a white indentured English servant and her husband Bannka, also a freed slave.

Banneker received no formal schooling except for a few weeks in a one-room Quaker schoolhouse near his father's farm. Although he read widely, his first love was mathematics, which led him to devise and construct a wooden striking clock around 1753. He raised tobacco, grew vegetables, and cultivated orchards and bees until the late 1780s, when he was forced to retire from farming due to poor health. Thereafter, he developed an interest in astronomy. By borrowing instruments and texts, he taught himself enough mathematics and astronomy to make celestial observations and calculations.

In 1791, he was employed for three months as a surveyor on the project commissioned by President George Washington to lay out a national capital. A year later, he wrote to then Secretary of State Thomas Jefferson, submitting a copy of his tabular calculation (or ephemeris) showing the positions of celestial bodies. This manuscript, he hoped, would serve as an example of intellectual achievement by an African-American and might motivate Jefferson and others to work toward ending slavery. Jefferson replied, "Nobody wishes more than I do to see such proofs as you exhibit, that nature has given to our black brethren, talents equal to those of other colors of men, and that the appearance of a want of them is owing to the degraded condition of their existence." The ephemeris was published in Baltimore under the title, Benjamin Banneker's Pennsylvania, Delaware, Maryland and Virginia Almanack and Ephemeris for the Year of Our Lord 1792. Banneker's almanacs appeared annually until 1797, were promoted by abolitionist societies, and were distributed widely in the United States and England.