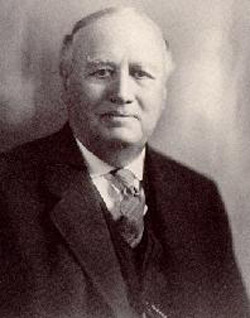 Daniel Barringer was a successful mining engineer who, in 1902, first heard of the crater in Arizona that would eventually be named after him (see Barringer Crater). A Princeton graduate (1879), Barringer came from a well-connected family, went hunting with Theodore Roosevelt, and owned a silver mine. When he learned that beads of iron were mixed in with the rocks of the crater's rim, Barringer immediately concluded that the great pit had been blasted out by an iron meteorite, roughly as wide as the crater, that now lay buried under the crater floor. Before even visiting the site, he formed the Standard Iron Company and began securing mining patents. But his excavation was doomed to failure. As we now know, the impacting body, though huge by everyday meteorite standards, was much smaller than Barringer had supposed, and most of it was broken apart and showered over a wide surrounding area. Barringer was wrong about the physics of hypervelocity cratering, and, after more than a quarter of a century of searching, his Meteor Crater Exploration and Mining Company ran out of money and shut down in 1929. He died shortly after, having lost nearly all his fortune. However, Barringer had by then succeeded in convincing most of the scientific community that his impact theory was correct.