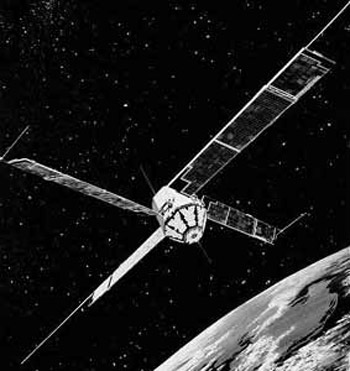 The Beacon Explorers (BE) were early satellites within NASA's Explorer series of spacecraft which measured the total electron count between the spacecraft and Earth by means of a radio beacon, and carried out other basic studies of the ionosphere. As well as by their BE designation they were known as Explorers 22 (BE-B) and 27 (BE-C).

Beacon Explorer-A, launched on March 19, 1964, failed to reach orbit following a malfunction of the third stage of the Delta launch vehicle. The identical Beacon Explorer-B (Explorer 22) was, however, successfully placed in orbit on Oct 10, 1964, by a Scout rocket as was it BE-C (Explorer 27) the following year.

Science instruments aboard Beacon Explorer-B included an electrostatic probe, a 20-, 40-, and 41-Hz radio beacon, a passive laser tracking reflector, and a Doppler navigation experiment. Its objective was to obtain worldwide observations of total electron content between the spacecraft and Earth. The satellite was initially spin-stabilized, but it was despun after solar paddle erection. Subsequent stabilization oriented the satellite axis of symmetry with the local magnetic field by means of a strong bar magnet and damping rods. A three-axis magnetometer and sun sensors provided information on the satellite attitude and spin rate. There was no tape recorder aboard so that satellite performance data and electrostatic probe data could be observed only when the satellite was within range of a ground telemetry station. Continuous transmitters also operated at 162 and 324 MHz to permit precise tracking by "Transit" tracking stations for navigation and geodetic studies.

Launched on April 29, 1965, also by a Scout, BE-C (Explorer 27) was essentially identical to BE-B. It was turned off on July 20, 1973, due to frequency interference with higher priority spacecraft.