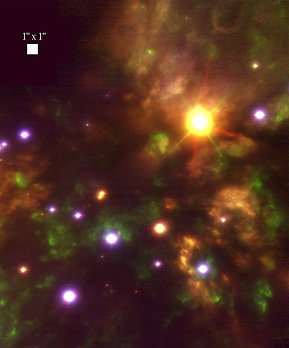 The Becklin-Neugebauer object is an intense source of infrared radiation in the Orion Nebula associated with a dust cloud that surrounds a newly formed star. Discovered by Eric Becklin (1940–) and Gerry Neugebauer (1932–2014) at the California Institute of Technology in 1966 – one of the first big finds of infrared astronomy – it is the brightest object in the sky (apart from the Sun) at wavelengths of less than 10 microns.

The BN object is about the size of the Solar System and has a surface temperature of only about 700 K, but deep inside, hidden from view, is a luminous star with a mass of some 15 solar masses and a surface temperature of some 26,000 K. Its birthing process involved the hot, bright stars of the Trapezium whose radiation exerts pressure on the nebular material around them. In the direction toward the Sun, this pressure has already dispersed the remaining dust and gas from which the Trapezium stars formed. In the direction away from us, however, the radiation pressure continues to compress dust and gas, triggering the collapse of new stars in the region where the luminous nebula and the dark, dense cloud behind it meet: the interface at which the BN object was formed.

Nearby, in the same environment, lies more evidence of stellar birth in the form of the Kleinmann-Low Nebula.