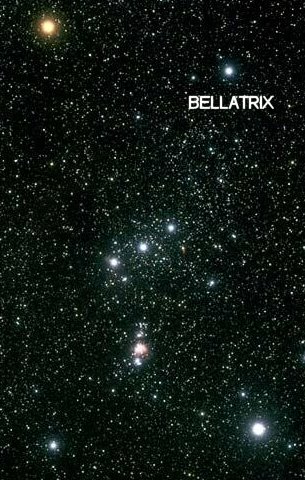 Bellatrix (Gamma Orionis) is a blue-white giant B star that is one of the hotter stars visible to the naked eye. Bellatrix is the third brightest star in Orion. Its Latin name means "female warrior".

Bellatrix was once believed to be part of the physical association of O and B stars that makes much of Orion, but is now known to lie much closer to the Sun and therefore to be an independent foreground object. Bellatrix also used to be taken as a standard against which astronomers could track the fluctuations of variable stars, but now it seems that Bellatrix is itself slightly variable, changing in brightness by a few percent over an undetermined period.