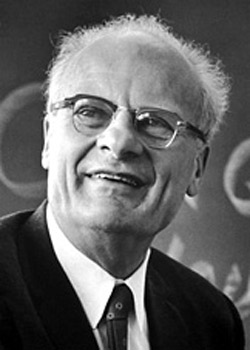 Hans Bethe was a German-born American theoretical physicist who, in 1939, worked out the details of the proton-proton chain, the main energy-producing reaction in stars with the mass of the Sun or less, and, in the same year, independently of Carl von Weizsäcker, developed the theory of the carbon-nitrogen-oxygen cycle, which dominates in stars that are more than about 1.3 times as massive as the Sun. For this work, he was awarded the 1967 Nobel Prize in Physics.

Bethe studied at the Universities of Frankfurt and Munich, where he earned his PhD under Arnold Sommerfeld (1928). He made important contributions to the theories of electrons in crystals, the negative hydrogen ion, and the passage of charged particles through matter, before leaving Germany in 1933 for England. There he began working in nuclear physics, and he and Rudolph Peierls developed the theoretical model of the deuteron shortly after its discovery.

Bethe spent most of his career as professor of theoretical physics at Cornell University (1935–75). His three review articles in the late 1930s (two of them with coauthors) became known as "Bethe's Bible" and formed the first textbook of nuclear physics. At the beginning of World War II, Bethe formed a theory of the penetration of armor by projectiles, and, with Edward Teller, produced a major paper on shock waves. From 1943 to 1946 he headed the theoretical group at Los Alamos, where the first nuclear bomb was designed and built. After the war he worked on nuclear matter and meson theory and was the first to explain the Lamb shift in the hydrogen atom. He was an important advisor to government agencies on both defense and energy policies, and wrote widely about arms control and the need for new energy policies.