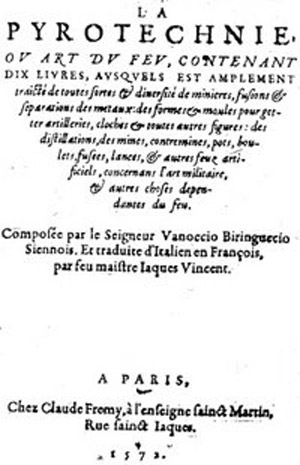 Vannoccio Biringuccio was an early Italian chemist whose reputation stems from a single work, De La Pirotechnia, published posthumously in 1540. It was the first printed comprehensive account of the fire-using arts, was a prime source on many practical aspects of inorganic chemistry, and contained a great deal about artillery and the manufacture of gunpowder. Pirotechnia offers one of the first written attempts to explain what causes a rocket to move. Biringuccio attributed the propulsive force to a "strong wind":

One part of fire takes up as much space as ten parts of air, and one part of air takes up the space of ten parts of water, and one part of water as much as ten parts of earth. Now sulfur is earth, consisting of the four elementary principles, and when the sulfur conducts the fire into the driest part of the powder, fire, and air increase ... the other elements also gird themselves for battle with each other and the rage of battle is changed by their heat and moisture into a strong wind.

Biringuccio's description of the burning, gas-exhausting phenomenon was correct enough, despite its non-technical language. Yet it failed to explain why a strong wind blowing downward should cause a rocket to rise upward. It was nearly a century and a half later that Isaac Newton provided the key with his third law of motion.