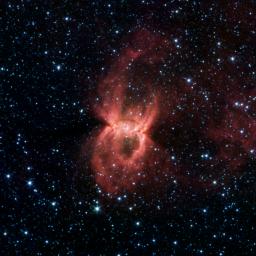 The Black Widow Nebula is an emission nebula that lies about 10,000 light years from Earth, just above the galactic plane, in the constellation Circinus. Nearly invisible at optical wavelengths due to the absorption of light by dust in the Galaxy's disk, the Black Widow Nebula was first seen clearly in 2005 at infrared wavelengths by NASA's Spitzer Space Telescope and its Infrared Array Camera (IRAC). Spitzer captured wispy streams of dust, flowing like spider's legs from the center of the nebula, where massive young stars are forming. These infant suns are spewing out radiation and particles to create two bubbles that are moving away from each other in opposite directions. They are basically destroying and dispersing the remnants of the material from which they were formed.