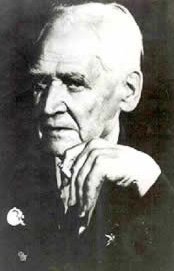 Anatoli Blagonravov was a Soviet Academician who helped establish cooperation in space between the United States and the Soviet Union. As Soviet representative to the United Nations' Committee on the Peaceful Uses of Outer Space (COPUOS) in the early 1960s, Blagonravov was a senior negotiator alongside NASA's Hugh L. Dryden for cooperative space projects at the height of the Cold War. During World War II, he specialized in infantry and artillery weapons, and later worked on the development of rockets.