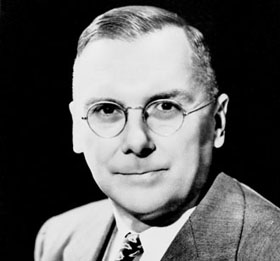 Hugh Dryden is an aerodynamicist and career civil servant who played a prominent role in American aerospace developments after World War II.

Dryden graduated from high school at the remarkably young age of 14 and earned an AB from Johns Hopkins University at age 17. Three years later, he was awarded a PhD in physics and mathematics from the same institution even though he had been employed full-time in the National Bureau of Standards since June 1918. His career at the Bureau, which lasted until 1947, was devoted to studying airflow, turbulence, and particularly the problems of the boundary layer. The work that he carried out in the 1920s, on measuring turbulence in wind tunnels, facilitated research by NACA (National Advisory Committee for Aeronautics) that led to the laminar flow wings used in the P-51 Mustang and other World War II aircraft. From the mid-1920s to 1947, Dryden's publications became essential reading for aerodynamicists around the world. During World War II, his work on a glide bomb named the Bat won him a Presidential Certificate of Merit. He capped his career at the Bureau by becoming assistant director and then associate director during his final two years there. He then served as director of NACA (1947–58), and later became deputy administrator of NASA under T. Keith Glennan and James Webb.