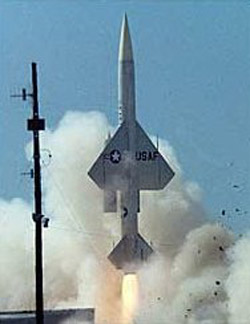 Bomarc was the world's first long-range anti-aircraft missile. Authorized by the US Air Force in 1949, the supersonic Bomarc was developed by Boeing and the University of Michigan Aeronautical Research Center, whose initial letters form its name. Bomarc missiles were housed on a constant combat-ready basis in individual launch shelters in remote areas. The alert signal could fire the missiles around the country in 30 sec. The Model A (military designation IM-99A) had a range of 200 mi, and the B, which followed, could fly 400 mi (about 650 km) and had a ceiling of over 24,000 m.