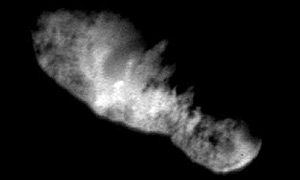 The nucleus of Comet Borrelly seen by Deep Space 1.

Comet Borrelly (19P/Borrelly) is a short-period comet discovered by the French astronomer Alphonse Borelly (1842–1926). It became only the second comet to have its nucleus photographed by a space probe when Deep Space 1 flew passed it at a distance of only 2,170 km on 22 September 2001.

Images from the Deep Space probe showed the 8-kilometer-long by 4-km-wide nucleus to be shaped like a bowling pin and to be spraying material into space along a handful of tightly collimated jets. Scientists were surprised when the probe revealed that, though the solar wind flows symmetrically around the coma of Comet Borrelly, the nucleus lies to one side, shooting out a great jet of material that forms the cloud that makes the comet visible from Earth. Around the most active regions are a series of flat-topped, steep-sided hills, or mesas, that probably formed much like terrestrial mesas. The top of each mesa has a thick insulating layer of dust, but the steep sides expose the underlying ice-rich comet material. Ices sublimate from the sides, undercutting the thick, insulating layer and causing sections of it to collapse on the valley floor. Borrelly seems to be broken into two pieces, canted at about 15°, that appear to chaff against each other, raising what look like compressional ridges at the boundary of the two sections.