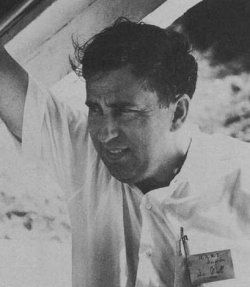 Gerald Bull is a Canadian aeronautical and artillery engineer at the center of various schemes to develop space cannons. Bull earned a PhD in aeronautical engineering and spent the 1950s researching supersonic aerodynamics in Canada. Inspired in his youth by reading Verne's From the Earth to the Moon, Bull's dream was to fire projectiles from Earth's surface directly into space. In 1961, he set up HARP (High Altitude Research Project), funded by McGill University in Montreal where Bull had become a professor in the mechanical engineering department, with support from the Army Ballistic Research Laboratory.

Following the collapse of HARP in 1967, Bull set up a private enterprise, Space Research Corporation, through which he tried to sell his space cannon ideas to various organizations and nations, including the Pentagon, China, Israel, and finally, Iraq. Bull's ultimate goal was to put a cannon-round into orbit for scientific purposes, but the military potential of his designs led him to become an arms trader. He set up a weapons plant in northern Vermont complete with workshops, artillery range, launch-control buildings, and radar tracking station. In 1980, he was jailed in the United States for seven months for a customs violation in supplying the South African military. Once out of prison, he abandoned his American enclave to work full-time in Brussels, Belgium. In November 1987, he was contacted by the Iraqi Embassy and invited to Baghdad. Bull promised the Iraqis a launch system that could place large numbers of small satellites into orbit for tasks such as surveillance. By 1989, the Iraqis were paying Bull and his company $5 million a year to redesign their field artillery, with the promise of greater sums for Project Babylon – an immense space cannon. The Iraqi space-launcher was to have had a barrel 150 m long and been capable of firing rocket-assisted projectiles the size of a phone booth into orbit. However, it was never built and Bull soon paid the price for his dangerous liaisons. On March 22, 1990, he was surprised at the door of his Brussels apartment and assassinated.