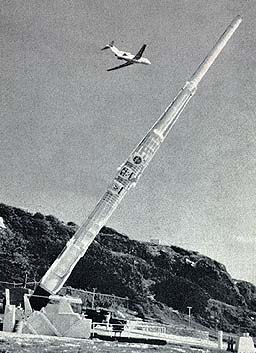 A space cannon is a gun so powerful that it can fire a projectile from Earth' s surface into space. The idea of using a cannon to put objects into orbit was first suggested in the seventeenth century in Isaac Newton' s Principia Mathematica. In 1865, in From the Earth to the Moon, Jules Verne envisioned a 274-m-long cannon, the Columbiad, sunk vertically into the ground not far from today' s Cape Canaveral, that sent a three-man capsule to the Moon. Unfortunately, Verne was hopelessly optimistic about his astronauts' chances of survival. In attaining Earth escape velocity inside the barrel of a gun, the passengers would be subjected to lethal g-forces. Yet, cannon offer distinct advantages over rockets as a way of placing inert payloads in orbit. Rockets must lift, not only their own weight, but the weight of their fuel and oxidizer. Cannon "fuel", which is contained within the gun barrel, offers far more explosive power per unit cost than rocket fuel. Cannon projectiles are accurate, thanks to the fixed geometry of the gun barrel, and are much simpler and cheaper than rockets. However, there are also serious drawbacks. The payload must be slender enough to fit into a gun barrel and sturdy enough to withstand the huge accelerations of launch, which can easily exceed 10,000g. See also Valier-Oberth Moon gun.

Long before the first test flights of the V-2, the Paris Gun of World War I set impressive altitude and speed records for artificial objects. In the 1950s, as the rocket became established as the primary means of reaching space, Canadian engineer Gerald Bull began a lifelong struggle to use guns for cheap access to the high atmosphere and Earth orbit. His Project HARP (High Altitude Research project) in the 1960s showed that a suborbital cannon can be cost-effective for studying the upper atmosphere, between 50 km and 130 km, and has the potential to launch vast numbers of satellites each year in all kinds of weather. A further development of this concept was Lawrence Livermore Lab's Project SHARP (Super High Altitude Research project).

Even if shot out of an extremely powerful cannon, a projectile would need to include a rocket in order to enter a stable orbit. This is for two reasons. First, reaching orbital velocity (with an extra margin for air resistance) is difficult using a cannon alone. Second, by Kepler's first law, any orbit is an ellipse with one focus at Earth' s center. If the payload is launched from a point A on Earth' s surface, its orbit necessarily would intersect the surface again at a symmetrically placed point B. An orbital adjustment is therefore essential.

Plans also exist for accelerating a payload by magnetic forces on a "rail gun" consisting of parallel conductors, into which a very large electric current is directed. The same problems apply here, plus the added one of storing and then suddenly releasing a great amount of electrical energy. This kind of technology might be appropriate for future use on the Moon but is at an even earlier stage than the space cannon.