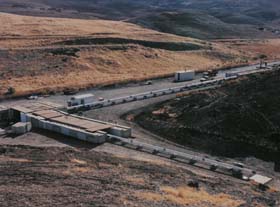 SHARP (Super High Altitude Research Project) was a light-gas gun developed at Lawrence Livermore Laboratory, California, and funded by the Strategic Defense ("Star Wars") Initiative as a possible antimissile defense weapon. It consisted of an 82-m-long, 36-cm-caliber pump-tube and a 47-m-long, 10-cm-caliber gun barrel, in an L-shaped configuration. This arrangement was chosen to circumvent one of the main technical problems with a space cannon, namely that the projectile cannot outrun the gas molecules which push it along the gun barrel. The speed of these molecules, at any temperature, can be calculated from the laws of physics and is higher the smaller the mass of the gas molecule. The lightest and best gas for the job is hydrogen, but hydrogen is not produced as a product of any explosive mixture. The solution in SHARP was to use a gun with two connected barrels, an auxiliary barrel and a main one in which the payload is accelerated. The two barrels were perpendicular to each other and separated by a partition which shattered when the pressure on it became too high. Rather than a shell, the auxiliary barrel carried a heavy piston, and its volume, between piston and partition, was filled with hydrogen. When the explosive mixture, consisting of methane and air, on the other side of the piston was detonated, the piston raced down the auxiliary barrel, compressing and heating the hydrogen ahead of it. At a certain point, the pressure of the hot hydrogen broke the partition, allowing the hydrogen to flow into the main barrel and propel the payload.

SHARP began operation in December 1992 and demonstrated velocities of 3 km/s (8–9 times the speed of sound) with 5 kg projectiles fired horizontally. Impressive as this capability sounds, it falls well short of what is needed to fire projectiles into space (at least 24 times the speed of sound for a low-altitude circular orbit), even if the barrel were pointed upward. Moreover, the $1 billion needed to fund space launch tests never materialized. In 1996, project leader John Hunter founded the Jules Verne Launcher (JVL) Company in an effort to develop the concept commercially. The company planned first to build a prototype Micro Launcher system that would fire 1.3-mm projectiles and demonstrate several new technologies, including the use of three pairs of supplemental gas injectors along the barrel, as used in the Valier-Oberth gun and V-3. The full-scale gun would have been bored into a mountain in Alaska for launches into high-inclination orbits, have a muzzle velocity of 7 km/s and fire 5,000-kg projectiles, each 1.7 m in diameter and 9 m long. Following burn of the rocket motor aboard the projectile, a net payload of 3,300 kg would have been placed into low Earth orbit. SHARP experience indicated that the space gun could have been fired up to once a day. Thus, a single gun could orbit over 1,000 tons a year into orbit at a cost per kg one-twentieth of conventional rocket launchers. Payloads would be subjected to accelerations of about 1,000g during launch, so Hunter recruited specialists to design prototype hardened satellite systems. JVL was still operating in 1998, but no investors came forward to finance the multibillion dollar development cost.