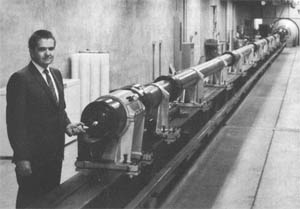 A light-gas gun is a device used to fire small objects at very high speeds against a target. Light-gas guns are used in hypervelocity research, such as studying the ablative effect of micrometeoroids on materials. A light-gas gun works in basically the same way as a spring piston air rifle. A piston of large diameter piston is used to force a gas a smaller diameter barrel containing the projectile to be accelerated. The reduction in diameter serves to increase the speed while decreasing the force. The piston is powered by an explosive chemical reaction; the working fluid is a light, usually helium (which is safer work with) or hydrogen (which gives the best performance and results in less erosion of the launch tube erosion). The light-gas gun is equipped with a rupture disk – a calibrated disk (usually metal) designed to act as a valve. When the pressure builds up to the desired level behind the disk, the disk bursts open, allowing the high-pressure light gas to pass into the barrel, thus ensuring that the maximum amount of energy is available when the projectile begins moving.

I used to shoot light-gas guns. In 1964–1965 there were two such devices in operation at the Delco Defense Research Laboratories in Goleta (near Santa Barbara), California. I joined the research team in 1965 when the guns were being used to fire 1¼-inch-diameter saboted projectiles, containing flat disks of aluminum, copper, and/or tungsten, at stationary targets. The object was to measure the shock wave transit times, at various particle speeds, and shock pressures to determine the Hugoniot equations of state.

These guns were pioneered by a group at the Utah Research and Development Co. in Salt Lake City, Utah. They started out as small things with bores no bigger than those of .22 caliber rifles. Alec Chambers of Santa Barbara determined that it was possible to scale these gun linearly and built several guns at Delco with a 1¼-in smooth bore. Using these, he learned how to control the launch ballistics and projectile stability in order to to simulate the physics of ICBM re-entry vehicles, and impact compressions produced by atomic detonations. The design consisted of a pump tube, containing hydrogen at a pre-calculated pressure; at one end was the firing chamber containing gun powder against a piston which was a polyethylene/lead wax cylinder with shear plate to hold it in place prior to ignition. The pump tube terminated in an accelerating reservoir, in which there was a conical diameter change from the 4-in-diameter pump tube to the 1¼-in launch tube. At the end of this conical section was a stainless steel, pre-scored petaling rupture disc clamped between the reservoir and launch tube. The pressure generated in the hydrogen by the explosively driven piston would rupture the disk and push on the saboted projectile seated just ahead of this fast-acting valve.

We could launch a 200-g projectile to a velocity of 21,000 ft/s in an evacuated chamber to strike an instrumented target positioned a meter from the muzzle. If we reduced the projectile mass to 100 g we could launch at 27,000 fps. Using tungsten and high density targets we could routinely produce shock pressures of 5 to 6 megabars.

Lawrence Livermore Laboratories eventually bought the gun I'd been developing for their own use after General Motors got out of the defense research business. The large gun at LLL was developed and manufactured at Delco Research Labs in 1967 and put in operation at the end of an 800-m vacuum chamber for studying the infrared and radar signatures of re-entry vehicles. I was a consultant for LLL on some experiments they performed using this big gun to impact some special targets. It was a linear scale-up of the one I used routinely, and nicknamed "the Savior" because everyone who visited the facility for the first time would always say, "Jesus Christ, what a big gun that is." This was ten years before Star Wars projects began.

The light-gas gun at the Aberdeen Ballistics Lab used an L-shaped configuration and never came close to the performance of our linear light-gas gun. It is really hard to get hydrogen to turn a corner at high pressure and speed. I know this because my ballistics engineer worked previously at BRL and on the gun described. Both of us have retired now and I'm pulling the dates and descriptions up from fading memory. We were in competition at the time with Soviet high energy physicists at the time, and discovered that they were "cheating." They used nuclear detonations to launch their impactor plates and, by this means, could achieve higher velocities. I remember pouring over the translations of their research results and wondering how they could do that with "explosive gases." So much for X-ray ablation launches.

There were a number of papers and research reports that describe my group's work in detail, only I now longer have copies or the clearance needed to access the archives. We were funded by the Defense Research Projects Agency, NASA, Defense Nuclear Agency, and BRL. I remember numerous trips to their home offices and entertaining their representatives when they visited Santa Barbara.