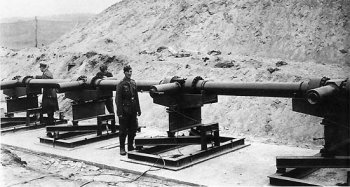 The V-3 was a German super-cannon designed by Saar Roechling during World War II; also known as the Hochdruckpumpe (HDP), "Fleissiges Lieschen", and "Tausend Fussler". The 140-m V-3 was capable of sending a 140-kg shell over a 165-km range. Construction began of a bunker for the cannons in September 1943 at Mimoyecques, France. However, the site was damaged by Allied bombing before it could be put into operation and was finally occupied by the British at the end of August 1944. Two short-length (45-m long) V-3s were built at Antwerp and Luxembourg in support of the Ardennes offensive in December 1944. These were found to be unreliable and only a few shots were fired, without known effect.