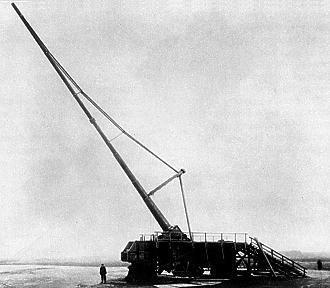 The Paris Gun was a supercannon with which the German army bombarded Paris from the woods of Crepy from March 1918 to the end of World War I. Also known as the Wilhelm Geschuetz (after Kaiser Wilhelm II), it is frequently confused with its immediate predecessor, the Lange Max (Long Max) and also with the Big Berthas – giant howitzers used by the Germans to smash the Belgian frontier fortresses, notably that at Liege in 1914. Although the famous Krupp-family artillery makers produced all these guns, the resemblance ended there.

The Paris Gun was a weapon like no other, capable of hurling a 94-kg shell to a range of 130 km and a maximum altitude of 40 km – the greatest height reached by a human-made projectile until the first successful V-2 flight test in October 1942. At the start of its 170-sec trajectory, each shell from the Paris Gun reached a speed of 1,600 m/s (almost five times the speed of sound). The gun itself, which weighed 256 tons and was mounted on rails, had a 28-m-long, 210-mm-caliber rifled barrel with a 6-meter-long smoothbore extension. After 65 shells had been fired, each of progressively larger caliber to allow for wear, the barrel was rebored to a caliber of 240 mm. The German goal of their great cannon was not to destroy France – it was far too inaccurate a device for that – but to erode the morale of the Parisians. From Mar through August 1918, three of the guns fired 351 shells at Paris from the woods of Crepy, killing 256 and wounding 620. As a military weapon the gun not a great success: the payload was minuscule, the barrel had to be regularly replaced, and the accuracy was only good enough for city-sized targets. But as a psychological tool it was remembered when the V-1, V-2, and, in particular, the V-3 were being developed two decades later. At the end of World War I, one spare mounting was captured by American troops near Chateau-Thierry, but no gun was ever found.